It’s been a decade since a swarm of relatively mild earthquakes shook up parts of Spokane. Now, armed with the right tools, scientists want to find out what was at fault.

“It was always something not as well understood as we thought it should be,” said Douglas Gibbons, a University of Washington researcher in Earth and space sciences, who is guiding installation of strong-motion sensors as part of a project called NetQuakes.

NetQuakes will install a half-dozen seismometers in the Spokane area by the end of June, mostly in volunteers’ homes, to help improve understanding of what lies beneath the city. 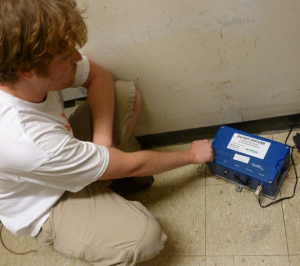 In the summer and fall of 2001, scores of quakes of magnitude 4.0 or less shook the Spokane area. Most were felt only in close proximity to their epicenters, and many were accompanied by popping sounds from the ground. Even quakes less than 1.0 magnitude were felt, and some toppled items from shelves, said Bill Steele, UW seismology laboratory coordinator.

He said such small quakes typically did not trigger automated earthquake detectors at the UW-based Pacific Northwest Seismic Network, but when residents reported specific times and locations of shaking, scientists were able to find the events reflected in the data, he said.

NetQuakes is a national U.S. Geological Survey program, administered regionally by the seismic network. Original plans were to focus NetQuakes installations in the Interstate 5 corridor of Western Washington and Oregon, but eventually scientists decided they wanted more information from east of the Cascades as well.

“Coverage in Spokane is sparse,” Gibbons said. “Even though the risk is low, that swarm proved that you can have medium to damaging earthquakes in that area.”

Eventually 12 to 14 seismometers might be added in the Spokane area, Gibbons said. Already about 95 of the devices have been deployed, including 14 in Portland, Ore., and one each in Ocean Shores and Yakima, and the rest in the Puget Sound region.

The devices not only will record any shaking that occurs, but also provide scientists with data to compare how shaking differs from one area to another depending on soil composition and geological structures.

NetQuakes sensors must have a level area for installation, with access to alternating current (less than 5 watts) and Internet access, either wired or Wi-Fi. On rare occasions technicians need access to the device, at the property owner’s convenience, and occasionally the homeowner might be asked to make minor adjustments, such as rebooting. Volunteers can sign up at https://sslearthquake.usgs.gov/monitoring/netquakes/signup/pacnw/.

The NetQuakes effort in Spokane follows USGS work the weekend of June 23 that used a vibrating trailer to send low-amplitude sound waves into the earth and an array of 240 seismometers to record the echoes as they returned.