Compared to normal cells, cancer cells have a prodigious appetite for glucose, the result of a shift in cell metabolism known as aerobic glycolysis or the “Warburg effect.” Researchers focusing on this effect as a possible target for cancer therapies have examined how biochemical signals present in cancer cells regulate the altered metabolic state.

Now, in a unique study, a UCLA research team led by Thomas Graeber, a professor of molecular and medical pharmacology, has investigated the reverse aspect: how the metabolism of glucose affects the biochemical signals present in cancer cells.

In research published June 26 in the journal Molecular Systems Biology, Graeber and his colleagues demonstrate that glucose starvation — that is, depriving cancer cells of glucose —activates a metabolic and signaling amplification loop that leads to cancer cell death as a result of the toxic accumulation of reactive oxygen species, the cell-damaging molecules and ions targeted by antioxidants like vitamin C. 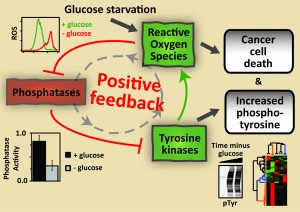 The research, which involved UCLA scientists from the Crump Institute for Molecular Imaging, the Institute for Molecular Medicine, the California NanoSystems Institute, the Jonsson Comprehensive Cancer Center, the Eli and Edythe Broad Center of Regenerative Medicine and Stem Cell Research, and the Department of Pathology and Laboratory Medicine, demonstrates the power of systems biology in uncovering relationships between metabolism and signaling at the network level.

“Most strikingly, our discovery that glucose withdrawal causes both cell death and increased tyrosine phosphorylation is intriguing because increased tyrosine kinase signaling is normally associated with cell growth,” said Nicholas A. Graham, a senior postdoctoral scholar in Graeber’s lab who helped design the project.

To explain the seemingly contradictory result that glucose deprivation reduced viability and at the same time increased signaling, the authors used an unbiased systems-biology approach that included phospho-tyrosine mass spectrometry and other biochemical profiling techniques.

Assessing the “crosstalk” between metabolism and signaling, they discovered that the glucose deprivation activates a positive feedback loop whereby the withdrawal of glucose induces increased levels of reactive oxygen species, which in turn inhibit negative regulators of tyrosine signaling. The resulting supra-physiological levels of tyrosine phosphorylation then generate additional reactive oxygen species.

“Because cancer cells live on the edge of what is metabolically feasible, this amplifying cycle of oxidative stress ultimately overwhelms and kills the cancer cell,” Graeber explained. “These findings illustrate the delicate balance that exists between metabolism and signaling in the maintenance of cancer cell homeostasis.”

In addition, the authors showed the possibility of exploiting this positive feedback loop for therapeutic intervention. Combining short-term glucose deprivation with an inhibitor of tyrosine phosphatases, they demonstrated synergistic cell death in a cancer cell line.

The findings by Graeber and his colleagues add to the emerging concept of systems integration between oncogenic signaling networks and the metabolism of malignant tumors. The work lays a foundation for future studies delineating how signaling and metabolism are linked, with the ultimate goal of refining therapeutic strategies targeting cancer metabolism.

The research team also included collaborators from the department of neurology and the human oncology and pathogenesis program at Memorial Sloan–Kettering Cancer Center and the department of pharmacology at Weill–Cornell Medical College.

The research was funded by the National Institutes of Health, UCLA’s Jonsson Comprehensive Cancer Center, and the California Institute of Technology–University of California, Los Angeles, Joint Center for Translational Medicine.