ANN ARBOR, Mich.— Across eight states in eight days, the nation’s winningest solar car team from the University of Michigan will defend its title next month in the American Solar Challenge that includes an overnight stop in its hometown.

The student team is vying for its seventh first-place finish and fourth consecutive championship. The North American contest has been held roughly every other year since 1990, when U-M won the inaugural event with a car called Sunrunner.

This year, the team will race Quantum, its lightest-ever vehicle that finished third in the World Solar Challenge in Australia last fall. Quantum weighs a full 200 pounds less than its most recent predecessor, and it is 30 percent more aerodynamic. The team of mostly undergraduates designs and builds a new car every two years. 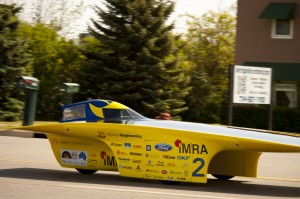 The 1,650-mile American race starts in Rochester, N.Y. on Sunday, July 14 and ends in St. Paul, Minn. Compared with previous routes, the path cuts through more cities and towns, and that could mean a tighter contest. In 2010, U-M finished two hours before its nearest competitor.

“We will have to deal with more city traffic and complex navigation,” said Caitlin Sadler, a master’s student in the School of Natural Resources and Environment and the team’s public relations lead.

Lower speed limits could constrain the cars below their capabilities. Quantum’s average (not top) speed in the World Solar Challenge was 52 mph.

“It could be impossible to pass someone,” said crew chief Ryan Mazur, who graduated in April with a bachelor’s degree in electrical engineering. “An observer with the race rides with each team and you cannot go over the speed limit. So reliability will be the most important factor in this race.”

U-M could have an advantage there because it is the only one of the 18 registered teams racing a car that has previously competed. Team leaders say they fixed the dependability issue that dogged Quantum in Australia. The car spent some pivotal minutes on the side of the road when cross winds and massive tractor-trailer road trains cause a wheel fairing to fail twice.

For the first time, the race will go through Ann Arbor in an overnight stop on July 16. 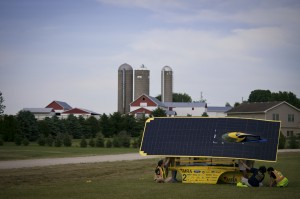 “It will be nice to show the other teams where we’re from,” said Mazur, a Commerce, Mich. native who was a driver in the last American race and also in the world race in 2011.

It also raises the stakes.

“Home court advantage is really special, but it also adds a lot of pressure because you don’t want to disappoint,” Sadler said. “We know what it means to wear the Block M in Ann Arbor.”

And the car, students say, stands for more than just those who will race it this year. Each contest cycle, as the team accommodates new regulations and works to improve the vehicle, they rely on lessons learned from previous teams.

“One of the most important aspects of the team is not just the car, but the team itself,” said Jordan Feight, race manager and a senior majoring in atmospheric, oceanic and space sciences. “Each race crew is a fusion of veteran and new members creating a pathway for the sharing of knowledge. Together, this allows the team to produce some of the world’s greatest solar vehicles.” Feight is from Novi, Mich.

With more than 100 students from schools and colleges across the university, the Solar Car Team is one of the largest student organizations on campus. Major sponsors are IMRA America, Inc., Michigan Engineering, Ford and GM.