Hemimegalencephaly is a rare but dramatic condition of infancy in which half the brain is malformed and much larger than the other half. Its cause is unknown, but the current treatment is radical: the surgical disconnection and removal of the diseased half of the brain.

In a paper published in the June 24 online issue of the journal Nature Genetics, a team of doctors and scientists says mutations in a trio of genes that help regulate cell size and proliferation are likely culprits in causing the disorder, though perhaps not the only ones.

These mutations, known as de novo somatic mutations, are genetic changes in the cells of the brain. Because they are in non-sex organs, the mutations are not transmitted to the child by either parent.

The findings, the scientists suggest, might create a path toward designing drugs that inhibit, or “turn down,” signals from these mutated genes, thus reducing the severity of the condition. 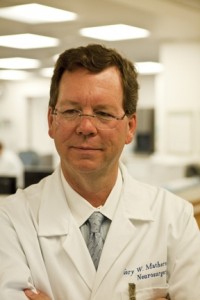 The research was a collaboration among Dr. Gary W. Mathern, co-senior author and a professor of neurosurgery at Mattel Children’s Hospital UCLA; Dr. Joseph G. Gleeson, co-senior author and a professor of neurosciences and pediatrics at the UC San Diego School of Medicine and Rady Children’s Hospital–San Diego; researchers from the Howard Hughes Medical Institute; and other colleagues.

Mathern, one of the country’s few pediatric neurosurgeons who specializes in hemispherectomy surgery — the removal of half the brain — to treat intractable epilepsy, provided brain tissue samples from 20 hemimegalencephaly patients for the study. The condition is so rare that it took nearly a decade to collect samples from enough patients.

Gleeson’s lab then analyzed and compared DNA sequences from the removed brain tissue with DNA from the patients’ blood and saliva.

“Dr. Mathern had reported a family with identical twins in which one had hemimegalencephaly and one did not,” Gleeson said. “Since such twins share all inherited DNA, we got to thinking that there may be a new mutation that arose in the diseased brain that causes the condition.”

Realizing they shared the same ideas about potential causes, the physicians set out to tackle the question using new exome sequencing technology, which allows for the sequencing of all the protein-coding exons of the genome at the same time.

The researchers ultimately identified three gene mutations found only in the diseased brain samples. All three mutated genes had previously been linked to cancers.

“We found mutations in a high percentage of the cells in genes regulating the cellular growth pathways in hemimegalencephaly,” Gleeson said. “These same mutations have been found in various solid malignancies, including breast and pancreatic cancer. For reasons we do not yet understand, our patients do not develop cancer but rather this unusual brain condition. Either there are other mutations required for cancer propagation that are missing in these patients, or neurons are not capable of forming these types of cancers.”

The mutations were found in 30 percent of the patients studied, indicating that other factors are involved. Nonetheless, the researchers have begun investigating potential treatments that address the known gene mutations, with the clear goal of finding a way to avoid the need for surgery.

“Although counterintuitive, hemimegalencephaly patients are far better off following the functional disconnection and removal of the enlarged hemisphere,” Mathern said. “Prior to the surgery, most patients have devastating epilepsy, with hundreds of seizures per day, completely resistant to even our most powerful anti-seizure medications. The surgery disconnects the affected hemisphere from the rest of the brain, stopping the seizures. If performed at a young age and with appropriate rehabilitation, most children suffer less language or cognitive delay, due to the neural plasticity of the remaining hemisphere.”

However, the researchers said, a less-invasive drug therapy would still be more appealing.

“We know that certain already-approved medications can ‘turn down’ the signaling pathway used by the mutated genes in hemimegalencephaly,” said lead author and former UC San Diego postdoctoral researcher Jeong Ho Lee, who is now at the Korea Advanced Institute of Science and Technology. “We would like to know if future patients might benefit from such a treatment. Wouldn’t it be wonderful if our results could prevent the need for such radical procedures in these children?”

Additional authors included My Huynh of the department of neurosurgery at UCLA’s Mattel Children’s Hospital and Geffen School of Medicine; Jennifer L. Silhavy, Tracy Dixon-Salazar, Andrew Heiberg, Eric Scott, Kiley J. Hill and Adrienne Collazo of the Institute for Genomic Medicine, Rady Children’s Hospital, UC San Diego and the Howard Hughes Medical Institute; Sangwoo Kim and Vineet Bafna of the department of computer sciences at the Jacobs School of Engineering, UC San Diego; Vincent Furnari and Carsten Russ of the Institute for Medical Genetics at Cedars–Sinai Medical Center and the department of pediatrics at UCLA’s Geffen School of Medicine; and Stacey B. Gabriel of the Broad Institute at MIT and Harvard.

The authors have no financial ties to disclose.