EAST LANSING, Mich. — To help keep the symptoms of muscular dystrophy at bay, doctors say patients should maintain a positive attitude and be as active as possible; complete inactivity can make the disease worse. Lucky for Mo Gerhardt, negativity and inactivity aren’t in his vocabulary. 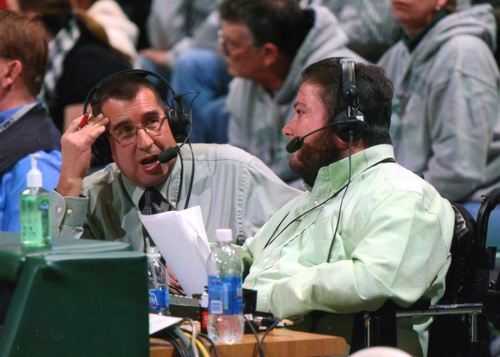 Mo Gerhardt, who has muscular dystrophy, does color commentary for the MSU women's basketball team. Photo courtesy of MSU.

Because of his muscular dystrophy and its complications, Gerhardt has plenty of excuses to be a curmudgeon. He is confined to a wheelchair. He has broken numerous bones, including his pelvis that is fused with two plates, eight screws and six bolts. He’s blind in his right eye. His condition is terminal, and he was told he wouldn’t live past his teens.

But as Mitch Albom learned, Gerhardt – who is now 34 – has an upbeat outlook and loves to prove doctors wrong. 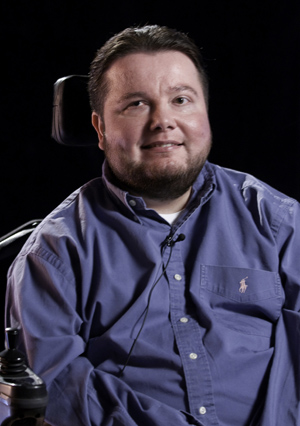 Mo Gerhardt, academic adviser for the College of Natural Science, has written a new book, "Perspective from an Electric Chair." Photo by Kurt Stepnitz.

“Mo Gerhardt is an inspiration. His story is one of courage and perseverance,” the author of Tuesdays with Morrie wrote on Gerhardt’s book. “Anyone who reads this book will be moved by Mo’s incredible outlook on life and his indomitable spirit.”

One incident in which Gerhardt writes would leave most people jaded for life. While traveling to the 2006 international powerhockey championships in Canada, Gerhardt’s bus to the hotel broke down upon arrival. After an hours-long wait, the second bus didn’t show because of a flat tire. The last-ditch option was using a public school bus to shuttle the team and their heavy wheelchairs in shifts. (Most people would be put out already.)

The situation turned bleaker for Gerhardt and the rest of his team when their distracted driver slammed into the back of a car. While everyone survived, the impact broke Gerhardt’s pelvis in two places. Being unable to secure a medical flight back to the U.S., Gerhardt arrived home in worse shape because he had to fly a commercial airline.

“My doctor said additional structural damage probably occurred due to the flight,” he said. “But I’ve always said that it’s not a diagnosis that determines my outcome.”

True to his mantra, he maintained his positive attitude, recovered from the accident and returned with his team two years later to claim his second international medal.

Gerhardt’s positive outlook, especially in light of the many challenges he’s faced, led to many people encouraging him to write a book. In fact, Albom, with whom Gerhardt remains friends, acted as a mentor through the writing process. The title, a play on words, is something that brings a smile to Gerhardt’s face.

“Getting people’s attention is half the battle, so I did it for shock value,” he said, chuckling at his pun. “What I have is not a death sentence, and my condition doesn’t define me. It gives me insight into the true meaning of what’s important in life – even if that perspective is from an electric chair.”