Scraps from sweet sorghum harvested for biofuel production enrich the diets of elephants, monkeys, parrots and other animals in Tucson’ Reid Park Zoo.

This holiday season, animals in Tucson’s Reid Park Zoo get to munch on a rare treat: scraps from the University of Arizona’s research into renewable energy sources.

Researchers from the UA’s department of agricultural and biosystems engineering, who are growing sweet sorghum for the production of environmentally friendly biofuel, have found a new way of disposing of the leftovers without throwing them away.

After harvesting, the plant’s 10-foot stalks are ground up to extract its sugary juice and process it into ethanol, which can be used as biofuel. The crushed stalks, along with any unused parts such as leaves and the seed-containing heads, end up in a waste pile. 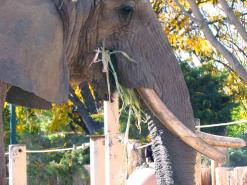 Shaba is happily munching on an armful of sweet sorghum, courtesy of UA's department of agricultural and biosystems engineering. (Photo: Jed Dodds)

“A while ago, the keepers at Reid Park Zoo approached us about corn stalks to feed to their animals,” said Carl Schmalzel, a senior research specialist in the department of plant sciences in the UA’s College of Agriculture and Life Sciences, who grows and helps harvest all sorts of crops used in the department’s various research projects.

“That made me think of the sweet sorghum stalks, because they’re more palatable than the corn stalks. So I asked them if they were interested in those, too.”

Since he already had a trailer loaded up with several hundred pounds of sweet sorghum material, Schmalzel took it to the zoo.

“We were delighted,” said Leslie Waters, area supervisor at Reid Park Zoo. “Not only was it already cut up and loaded, but Carl was kind enough to deliver it, too. We don’t have the resources to always be able to take advantage of outside opportunities such as a downed tree, so this made us very happy.”

Also called the sugarcane of the desert or sorgo, sweet sorghum is a tall grass especially adapted to the desert climate and environment. It grows fast and yields up to twice as much ethanol as corn – up to 500-600 gallons per acre, UA researchers estimate. 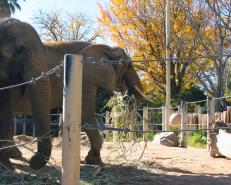 Two elephant ladies call Reid Park Zoo their home. Connie (left), who is 43, is an Asian Elephant, and Shaba (31) is an African Elephant. (Photo: Jed Dodds)

“Since we’re growing the sorghum for research purposes, we have several plots with different varieties and different levels of maturity,” Schmalzel explained. “Before we grind up the stalks in the mill, we strip the leaves and cut the heads off.”

“Once we determined the sorghum was free of pesticides and safe to feed to our animals, we decided to try it,” Waters said. “The elephants love it, but we also feed it to our monkeys and the parrots.”

Because the plants are harvested a good month past flowering, their heads are loaded with seeds.

“Those are a big hit with the birds in our aviary,” Waters said.

Waters pointed out that because the zoo animals have to follow a certain diet catering to their individual needs, the sorghum doesn’t replace their regular feed.

“It’s more of a treat for them,” she said. “We look at it as something extra to munch on. It enriches their daily routine.”

For example, Shaba and Connie, the two elephants, get about an armful each three times a week. The last load that Schmalzel dropped off about three weeks ago was the second and is expected to last the zoo a few more weeks.

“We are really appreciative of this effort,” Waters said. “This way, our animals get treated to something different, and we are making good use of something that otherwise would just be thrown out. We know we can trust the UA, and the fact that they were kind enough to even deliver the sorghum to us is a great present for the animals.”

And while Shaba and Connie are munching away, Schmalzel has already started loading the trailer again.