AMHERST, Mass. – When microbiologist James Holden of the University of Massachusetts Amherst launches new studies next month of the microbes living deep in the cracks and thermal vents around an undersea volcano, for the first time in his 25-year career his deep-sea research will not be funded by a government source.

Instead, Holden will be funded by philanthropists committed to supporting oceanographic research: The Gordon and Betty Moore Foundation started by the co-founder of Intel and his wife, and the Schmidt Ocean Institute (SOI), started by Eric Schmidt of Google and his wife, Wendy. The Moores’ foundation is dedicated to advancing environmental conservation and scientific research, while the SOI supports oceanographic research projects that “help expand the understanding of the world’s oceans through technological advancements, intelligent observation and analysis, and open sharing of information.”

Holden says, “This doesn’t happen very often with ocean research, but I’m very pleased to receive the support. This private funding shows how science research has shifted,” he adds. “I still apply for grants from NSF and NASA, but ocean scientists are becoming more dependent on private philanthropy. I’m very glad that organizations outside of the federal government are interested in our research and see the value of the science.” 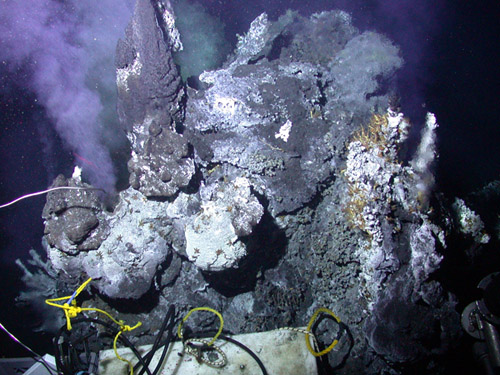 Holden studies high temperature microbes that thrive around 200 degrees F near “black smoker” vents that spew out clouds of dark, superheated water up to 660 degree F. His work addresses such questions as what metabolic processes may have looked like on Earth 3 billion years ago and what microbial life might look like on other planets. “It’s thought that the organisms found in these hydrothermal vents are the best representation of the first life on the planet,” he notes.

He and colleagues will depart on Sept. 3 from Seattle on back-to-back research cruises to Axial Volcano, a long-term undersea observatory with scores of super-hot vents about 300 miles off the coast of Oregon and nearly one mile below the surface. Both oceanographic expeditions are supported in part by the Gordon and Betty Moore Foundation, the first aboard a University of Washington (UW) research vessel and the second, ending Oct. 5, aboard the SOI research vessel Falkor, with SOI funding its operations. UMass Amherst graduate students Begum Topcuoglu and Lucy Stewart will join the first and second trips, respectively.

Holden says, “We’re interested in microbes that live deep within rock, independent of light and oxygen, and the best place to study them is at hydrothermal vents on top of undersea volcanoes. Warm water springs bring the nutrients and energy sources they need to survive.” Studying these relatively new-to-science species of subsurface microorganisms advances understanding of biogeochemical cycles in the deep ocean. 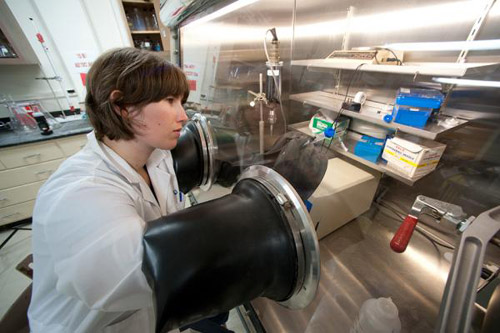 UMass Amherst graduate student Lucy Stewart working in an oxygen-free chamber. She will be on the Falkor cruise. Photo courtesy of UMass Amherst

The upcoming studies at Axial Volcano will expand microbiology research Holden and others started there in the early 1990s. Last year, his lab group for the first time established quantitative hydrogen requirements for hyperthermophilic (super-heat-loving) methanogenic (methane-producing) microbes in hydrothermal fluids. Holden and colleagues are experts at developing and testing growth models for volcanic microbes. “The volcano has erupted twice since the 1990s, so our long-term interest is also to follow the cycles of what happens before, during and after deep ocean eruptions,” he adds.

“Because this is such a little-known environment, we don’t know the factors that dictate how life goes on, what traces life leaves behind or what sort of microbe-induced mineral changes takes place. This is of interest for the current Mars missions, for example. We may be able to develop tools and spectroscopic techniques for recognizing the bio-signature of an alien microbe there, so we wouldn’t miss it. We might identify tools we would need on a spacecraft to say: ‘This was made by a life form.’ We could help the researchers roving around the surface of Mars with a question like that.”

Further, some of the hyperthermophiles that Holden studies degrade simple organic wastes, kill pathogens and give off hydrogen that can be burned to produce energy, results that may have future practical applications in the environmental cleanup of brewery, dairy, winery and other agricultural waste.

Colleagues from the Marine Biological Laboratory on Cape Cod, UW and the J. Craig Ventner Institute of La Jolla will join Holden. The UW research ship Thomas G. Thompson, the first cruise’s host vessel, will be equipped with the remotely operated vehicle (ROV) Jason II from the Woods Hole Oceanographic Institution for the dangerous sea-floor exploration. On the second research trip, researchers will use the Canadian ROV ROPOS when aboard the SOI research vessel. Overall, both projects are funded in part by the Gordon and Betty Moore Foundation through grant GBMF3297.

Coordinators of both expeditions plan to provide live video feed and a blog from the research cruise on SOI’s website.