What goes in must come out, a truism that now may be applied to global river networks.

Human-caused nitrogen loading to river networks is a potentially important source of nitrous oxide emission to the atmosphere. Nitrous oxide is a potent greenhouse gas that contributes to climate change and stratospheric ozone destruction.

It happens via a microbial process called denitrification, which converts nitrogen to nitrous oxide and an inert gas called dinitrogen.

When summed across the globe, scientists report this week in the journal Proceedings of the National Academy of Sciences (PNAS), river and stream networks are the source of at least 10 percent of human-caused nitrous oxide emissions to the atmosphere. 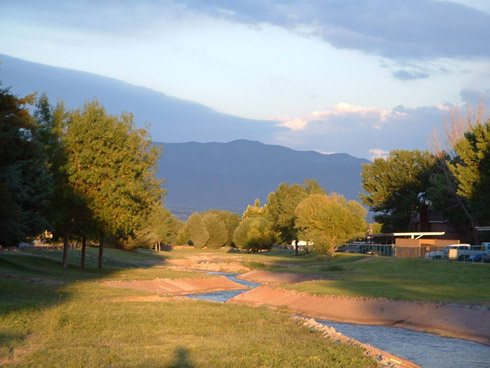 The Corralles drainage ditch in Albuquerque, N.M., was one of 72 study sites in the research. Image credit: Chelsea Crenshaw

“Human activities, including fossil fuel combustion and intensive agriculture, have increased the availability of nitrogen in the environment,” says Jake Beaulieu of the University of Notre Dame and the U.S. Environmental Protection Agency in Cincinnati, Ohio, and lead author of the PNAS paper.

“Much of this nitrogen is transported into river and stream networks,” he says, “where it may be converted to nitrous oxide, a potent greenhouse gas, via the activity of microbes.”

Beaulieu and co-authors measured nitrous oxide production rates from denitrification in 72 streams draining multiple land-use types across the United States. Their work was part of a broader cross-site study of nitrogen processing in streams. 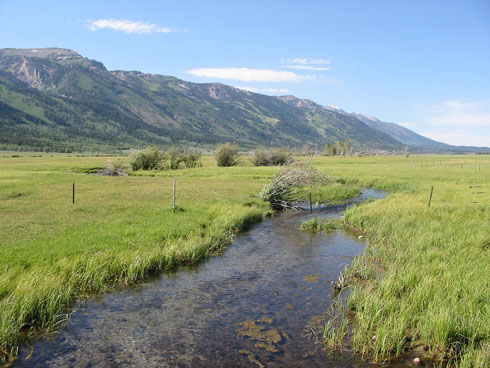 Stream flowing through a pasture at the foot of the Grand Teton Mountains in Wyoming. Image credit: Jake Beaulieu

“This is especially the case for those draining nitrogen-enriched urbanized and agricultural watersheds, highlighting the importance of managing nitrogen before it reaches open water,” Gholz says. “This new global emission estimate is startling.”

Atmospheric nitrous oxide concentration has increased by some 20 percent over the past century, and continues to rise at a rate of about 0.2 to 0.3 percent per year. 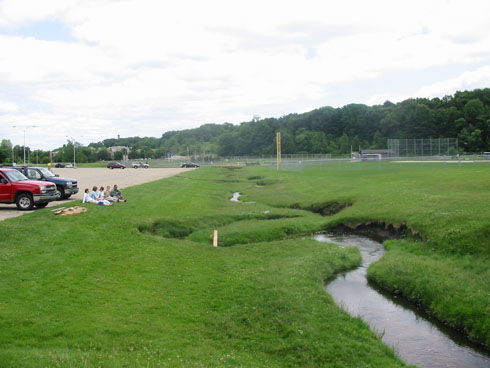 They believe that nitrous oxide is the leading human-caused threat to the atmospheric ozone layer, which protects Earth from harmful ultraviolet radiation from the Sun.

Researchers had estimated that denitrification in river networks might be a globally important source of human-derived nitrous oxide, but the process had been poorly understood, says Beaulieu, and estimates varied widely.

While more than 99 percent of denitrified nitrogen in streams is converted to the inert gas dinitrogen rather than nitrous oxide, river networks are still leading sources of global nitrous oxide emissions, according to the new results.

“Changes in agricultural and land-use practices that result in less nitrogen being delivered to streams would reduce nitrous oxide emissions from river networks,” says Beaulieu.

The findings, he and co-authors hope, will lead to more effective mitigation strategies.