Geologists Correct a Rift in Africa

EAST LANSING, Mich. — The huge changes in the Earth’s crust that influenced human evolution are being redefined, according to research published today in Nature Geoscience.

The Great Rift Valley of East Africa – the birthplace of the human species – may have taken much longer to develop than previously believed.

“We now believe that the western portion of the rift formed about 25 million years ago, and is approximately as old as the eastern part, instead of much younger as other studies have maintained,” said Michael Gottfried, Michigan State University associate professor of geological sciences. “The significance is that the Rift Valley is the setting for the most crucial steps in primate and ultimately human evolution, and our study has major implications for the environmental and landscape changes that form the backdrop for that evolutionary story.” 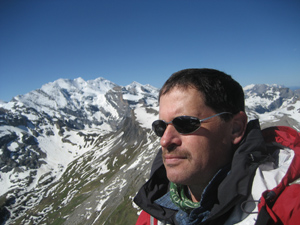 Gottfried worked with an international team led by Eric Roberts at Australia’s James Cook University who added that the findings have important implications for understanding climate change models, animal evolution and the development of Africa’s unique landscape.

The Rukwa Rift (a segment of the western branch) is an example of a divergent plate boundary, where the Earth’s tectonic forces are pulling plates apart and creating new continental crust. The East African Rift system is composed of two main segments: the eastern branch that passes through Ethiopia and Kenya, and a western branch that forms a giant arc from Uganda to Malawi, interconnecting the famous rift lakes of eastern Africa.

Traditionally, the eastern branch is considered much older, having developed 15 to 25 million years earlier than the western branch.

This study provides new evidence that the two rift segments developed at about the same time, nearly doubling the initiation age of the western branch and the timing of uplift in this region of East Africa.

“A key piece of evidence in this study is the discovery of approximately 25 million-year-old lake and river deposits in the Rukwa Rift that preserve abundant volcanic ash and vertebrate fossils,” Roberts said.

These deposits include some of the earliest anthropoid primates yet found in the rift, added Nancy Stevens of Ohio University.

The findings imply that around 25 to 30 million years ago, the broad uplift of East Africa occurred and re-arranged the flow of large rivers such as the Congo and the Nile to create the distinct landscapes and climates that mark Africa today.