New research shows fungi living beneath the seafloor are widespread

Fungi living beneath the seafloor are widespread in ocean environments around the world, according to a new paper by scientists at the University of Delaware and Woods Hole Oceanographic Institution.

Biddle and her colleagues examined mud taken from the bottom of the sea at sites ranging from off the coasts of Oregon to Peru to Namibia. Through a careful examination of genetic material in the samples, they found about 70 different kinds of fungi.

The fungi may help break down food for the bacteria living deep within the seafloor, playing a role in the long-term movement of carbon and other elements through the environment, Biddle said.

Scientists first discovered fungi in ocean sediments about a decade ago and succeeded in getting them to grow in the lab. It wasn’t clear, however, whether the fungi were inactive spores just “hanging out” when in the seafloor, Biddle said, coaxed into activity only when in a hospitable lab setting — not unlike a seed that grows only with dirt, water and sunlight. 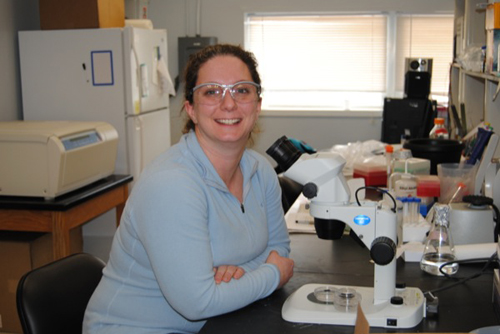 Marine biosciences faculty member Jennifer Biddle in her lab in at the Hugh R. Sharp Campus in Lewes, Del. Images by Rebecca Rothweiler and courtesy of William Orsi

Biddle and co-authors William Orsi and Virginia Edgcomb of Woods Hole decided to focus on the fungi’s genes to learn more about what they are doing in the seafloor. Using a novel approach, they analyzed sequences of ribosomal ribonucleic acid (rRNA), a cell component important in making proteins, which gives a strong indication that the source is living.

Several years ago they found that deep-sea sediment fungi should be active based on a few samples from the coast of Chile. Their new study, published in PLOS ONE on Feb. 8, expands the dataset from 40 to 20,000 rRNA sequences with samples from a total of six different sites, using strict controls to rule out contamination.

“It’s a comprehensive study,” Biddle said. “We took cores from all over the world, we took cores from different depths, and what this study showed is that there is an impressive amount of fungal rRNA in the sediments.”

The genetic material is not the only clue that the fungi are alive, despite the harsh conditions meters below the seafloor surface. The researchers found patterns connecting the chemistry of the sites — like the amount of carbon, nitrogen and sulfides — with the presence of fungi populations.

“If conditions are right for growth, they will grow,” Orsi said. 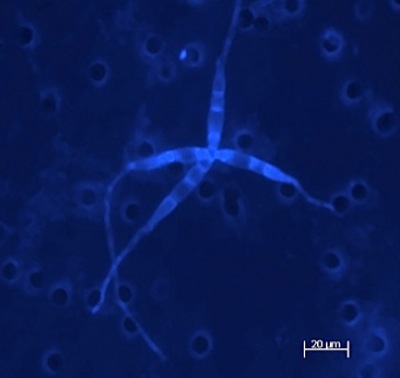 The trends suggest that fungi like living in those areas and are suited for life there, instead of just being inactive spores that blew into the ocean, sank to the bottom and got buried in the muck.

“The fact that the chemistry, no matter where it is in the world, shows the same conditions suggests that there’s activity,” Biddle added. “We see that the chemistry looks similar and the organisms look similar, so that suggests they’re not just being carried by the ocean and just hanging out and not being active. They’re adapted to live there.”

The only other organisms known to live in deep-sea sediments are the single-celled microbes bacteria and archaea. Finding that fungi, which are much larger and have multiple cells, also reside there stretches the range of conditions where more complex life can survive.

Underneath the seafloor there may be no oxygen, there is heavy pressure from the weight of the sea and there are only dead bits of things to eat. Under such extreme conditions with limited resources, fungi are slow to grow and not living in ways we are used to seeing, Biddle said.

For example, E. coli bacteria can reproduce every 20 minutes, but these deep-sea fungi may take thousands of years to reproduce.

Researchers continue to examine what deep-sea fungi are doing beneath the sea and explore whether they help break down food for microbes that live even deeper inside the earth. Theoretically, down the road, these new fungi could help create new antibiotics.

“Any time you go into a new environment and look at the microbial life there, whether it’s bacteria, archaea or fungi, there’s a really good chance that we’re going to find something new in terms of the pharmaceutical or industrial-applicable enzymes,” Biddle said.