From flounders to seahorses: Evolutionary success of spiny-rayed fishes detailed

Even as the dinosaurs were becoming extinct 66 million years ago, the ancient ancestor of spiny-rayed fishes flourished, eventually giving rise to tens of thousands of species that can now be found in home aquariums or on dinner plates. Using modern genetic tools and information from the fossil record, a team led by researchers at Yale University, University of Oxford, and University of California-Davis have constructed a detailed evolutionary history of the 18,000 species of spiny-rayed fishes existing today, a diverse group that includes basses, pufferfishes, and cichlids, and that comprises a large portion of the vertebrate tree of life.

The findings published the week of July 15 in the Proceedings of the National Academy of Sciences show surprisingly close evolutionary relationships between lineages of fish species such as tunas and seahorses, and suggest some fish lineages — like cichlids, the tiny gobies, and little-studied snailfishes — are experiencing high rates of new species origination.

“In classifying fishes, scientists used to put tunas and the swordfish in the same taxonomic group or ‘bucket’,” said Thomas Near, associate professor of ecology and evolutionary biology and lead author of the paper. “This new molecular work allows us to refine our buckets and shows, for instance, that swordfish are actually more closely related to flounders and other flatfishes than to tunas.” 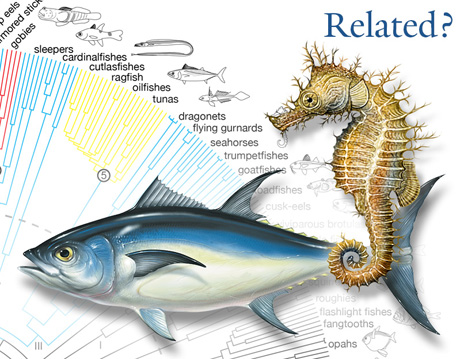 The ancestor of all spiny-rayed fishes, or acanthomorphs, arose 140 million years ago, and emerging lineages spread to almost all oceans and freshwater habits. Acanthomorphs include almost a third of all vertebrate species, and their body plans are as diverse as flatfishes, deep sea anglerfishes, and several lineages that resemble eels.

“They account for almost every fish we eat today in the United States, with the exception of anchovies, catfish, trout, herrings, and salmon,” Near said.

To understand the history of the acanthomorph’s evolutionary success, the team studied 10 genes with a known mutation rate in 520 different fish species and cross-checked results with fossils of known ages. In addition to discovering surprising genetic relationships, they also discovered that some families of fish — such as snailfish and cichlids — seem to have high rates of speciation, meaning the extraordinary species richness of spiny-rayed fishes continues to be generated in a wide variety of habitats.

“Their success does not seemed to be tied to a single habitat like coral reefs as some have thought, but to their versatility,” Near said.