Pollination, essential to much of life on earth, requires the explosive death of the male pollen tube in the female ovule. In new research, Brown University scientists describe the genetic and regulatory factors that compel the male’s role in the process. Finding a way to tweak that performance could expand crop cross-breeding possibilities.

PROVIDENCE, R.I. [Brown University] — Millions of times on a spring day there is a dramatic biomolecular tango where the flower, rather than adorning a dancer’s teeth, is the performer. In this dance, the female pistil leads, the male pollen tubes follow, and at the finish, the tubes explode and die. A new paper in Current Biology describes the genetically prescribed dance steps of the pollen tube and how their expression destines the tube for self-sacrifice, allowing flowering plants to reproduce.

High school biology leaves off with this: In normal pollination, sperm-carrying pollen grains land on the pistil’s tip, or stigma, and grow tubes down its style to reach the ovaries in the ovules at the pistil’s base. Once the tubes reach their destination, they burst open and release their sperm to fertilize each of the two ovaries in every ovule.

In his lab at Brown University, Mark Johnson, associate professor of biology, studies the true complexity of intercellular communications that conduct this process with exquisite precision.

Among the fundamental biology questions at play in the sex lives of flowers, for example, are how cells recognize each other, know what to do, and know when to do it. Last year, for instance, Johnson and his research group showed how, for all the hundreds of pollen tubes that grow through the pistil, each ovule receives exactly two fertile sperm.

“As we drill into the details, it’s a really great system for understanding how cellular identity is established and read by another cell,” Johnson said. “The moves in the dance between the pollen and the pistil are a back-and-forth [of signals] as the pollen tube is growing. It’s quite a dynamic system that happens over the course of a few hours.” 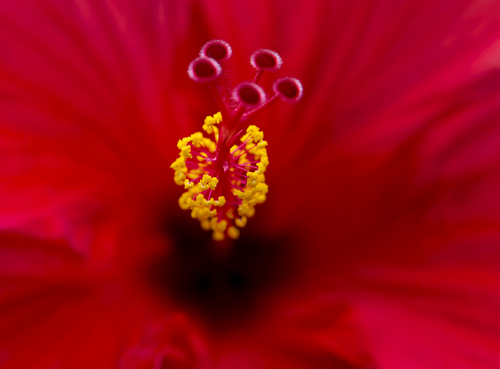 A portal to cellular communications. The back-and-forth communications within the reproductive system of flowers is “a really great system for understanding how cellular identity is established and read by another cell.” Image credit: Mike Cohea/Brown University

In the new paper, Johnson’s group, led by third-year graduate student Alexander Leydon, sought to discover what convinces the male pollen tubes to stop growing and burst when they reach the ovule. Scientists have begun to understand the female’s commands, but not the male’s ability to listen.

What they knew from a prior study is that the gene expression in pollen tubes that had grown through a pistil was much different than that of pollen tubes grown in the lab. Leydon’s first step, therefore, was to see which regulators of gene expression, or transcription factors, were at work in pistil-grown pollen tubes but not in the lab-grown ones. First they found one called MYB120 and through genomic analysis found two close associates: MYB101 and MYB97.

He tagged these with fluorescing proteins and found under the microscope that these transcription factors accumulated in the nuclei of the pollen tubes as they grew in the pistil.

Having placed them at the scene, Leydon then decided to see what happens when they aren’t. He grew some normal arabadopsis plants, some in which a mutation disabled only one of the transcription factors, and other ones in which the genes for all three transcription factors were disabled. Then he took the pollen from each to pollinate normal flowers. The pollen tubes from all three plants reliably made it to ovules, but in 70 percent of the ovules encountered by the triple mutants, the pollen tubes didn’t stop growing and then burst. Instead they kept growing, coiling, and remaining intact.

“The pollen tube gets to the right place, which you’d think is the hardest part,” Johnson said. “But once it gets there it’s unable to hear the message from the female to stop growing and burst.” 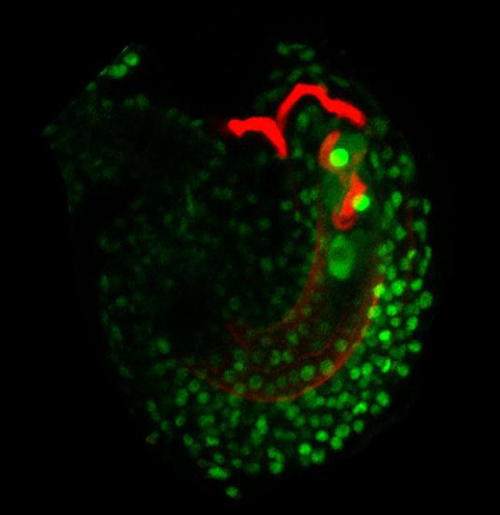 Ready. Aim, … aim, … aim, … aim, …Pollen without a gene that codes for a protein called thionin cannot “hear” the pistil’s command to explode when their pollen tubes reach the ovule. They just keep growing, coiling inside the ovule (above), and fertilization does not occur. Image credit: Johnson lab/Brown University

From there the team looked for which pollen tube-expressed genes were being regulated by the MYB transcription factors. In pollen tubes that had grown through pistils, they found 11 that were grossly underexpressed in the mutated pollen tubes, compared to normal ones.

Finally, they looked at what those genes do. They encode a variety of tasks, but one in particular got Leydon’s attention because it is responsible for the secretion of a protein called a thionin.

“For the thionin, I was especially excited because they have been described as being able to essentially burst open other cells,” Leydon said. “That would be something that would be able to bind to a membrane and cause a pore to form.”

In other words, expressing that gene could be pushing the pollen tube’s self-destruct mechanism.

“This is not just a dialogue but a dialogue that ends in death,” Leydon said. “It’s a really well-controlled cell death situation.”

Future work, Johnson said, will include tracking down the relevant genes more fully and determining whether thionin is indeed the pollen tube buster that the genes and their MYB-related expression seem to indicate.

The work may also have implications beyond basic science, Johnson said.

Agronomists sometimes try to cross-breed species, such as barley and wheat, in hopes of creating new crops. That can be done if the different species are closely related and share the same number of chromosomes, but fertilization often fails at the pollen tube burst-and-release step.

“Understanding this molecular back-and-forth at all the different levels and stages will be useful to either engineer the process or introduce genetic diversity that will allow the reproductive process to be efficient even in difficult environmental conditions,” Johnson said.

In addition to Leydon and Johnson, other Brown authors are Kristin Beale, Karolina Woroniecka, Elizabeth Castner, Jefferson Chen, and Casie Horgan. Ravishankar Palanivelu of the University of Arizona is a co-author. Chen, Castner, and Woroniecka were Brown undergraduates who joined the project as Brown–Howard Hughes Medical Institute Summer Scholars.

The National Science Foundation funded the study with grant IOS-1021917. The researchers used the Brown University Genomics Core Facility in their work.