A Yale scientist and colleagues in Britain have found a highly unusual ancient marine fossil that retains soft body parts as well as its shell, including limbs, eyes, gills and alimentary system. The fossil represents a new species of ostracod, a tiny crustacean related to crabs, lobsters and shrimps.

“Fossil ostracods often provide evidence of the relative ages of the rocks in which they occur, but it is very difficult to determine their relationship to living forms because only the shell is normally preserved,” said Derek E. G. Briggs, director of Yale’s Peabody Museum of Natural History and a co-author of the research. “This 425-million-year-old new form is remarkable in preserving the limbs and other anatomical features as well.”

Briggs and colleagues at several British institutions reported their findings Dec. 12 in the Proceedings of the Royal Society B. David J. Siveter of the University of Leicester is lead author. 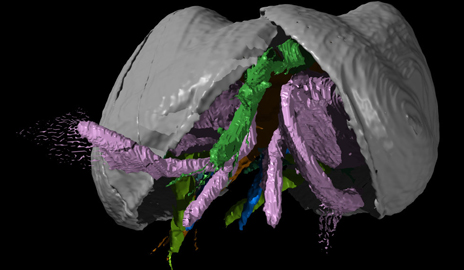 A frontal view of Pauline avibella, an unusual tiny fossil crustacean from 425 million years ago retaining soft body parts as well as its shell, including limbs, eyes, gills and alimentary system. (Illustration by Mark Sutton and David Siveter)

The crustacean, which the scientists have named Pauline avibella, provides them with unusually detailed information about an animal dating from the Silurian Period. The new find could also prompt researchers to rethink established classifications of fossil ostracods that are based solely on the evidence of shells, and to reinterpret the evolutionary history of this important group.

The new fossils — there are two specimens — were found in the Herefordshire fossil deposit, a rich trove of ancient marine life forms along the English-Welsh border. The larger of the specimens measures about 10 millimeters long, big for its kind.

Found encased in calcified concretions, the fossils were sliced in extremely thin layers. Scientists then reconstructed the animal three- dimensionally by stacking the digital images of these layers.

The paper is titled “A Silurian myodocope with preserved soft-parts: cautioning the interpretation of the shell-based ostracod record.”

Other authors are Sarah C. Joomun of the University of Oxford and Mark D. Sutton of Imperial College London. The Natural Environment Research Council provided support for the research.