Fossil indicates hairy, squirrel-sized creature was not quite a mammal

165 million-year-old omnivore may have had armadillo-like gait

“We finally have a glimpse of what may be the ancestral condition of all mammals, by looking at what is preserved in Megaconus. It allows us to piece together poorly understood details of the critical transition of modern mammals from pre-mammalian ancestors,” said Zhe-Xi Luo, professor of organismal biology and anatomy.

Discovered in Inner Mongolia, China, Megaconus is one of the best-preserved fossils of the mammaliaform groups, which are long-extinct relatives to modern mammals. Dated to be about 165 million years old, Megaconus co-existed with feathered dinosaurs in the Jurassic era, nearly 100 million years before Tyrannosaurus rex roamed Earth. 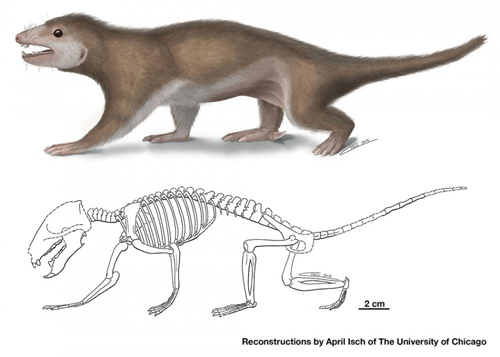 Skeletal features show that Megaconus was a terrestrial animal with an ambulatory (“walking”) gait, similar to a modern rock hyrax or armadillo. This new fossil species has features in common with modern mammals, but its first cheek tooth has a large, cone-shaped cusp, resulting in its name Megaconus mammaliaformis (“ancestral mammal with a big cusp”). Illustration by April Isch

A terrestrial animal about the size of a large ground squirrel, Megaconus was likely an omnivore, possessing clearly mammalian dental features and jaw hinge. Its molars had elaborate rows of cusps for chewing on plants, and some of its anterior teeth possessed large cusps that allowed it to eat insects and worms, perhaps even other small vertebrates. It had teeth with high crowns and fused roots similar to more modern, but unrelated, mammalian species such as rodents. Its high-crowned teeth also appeared to be slow-growing like modern placental mammals.

The skeleton of Megaconus, especially its hind-leg bones and finger claws, likely gave it a gait similar to modern armadillos, a previously unknown type of locomotion in mammaliaforms. 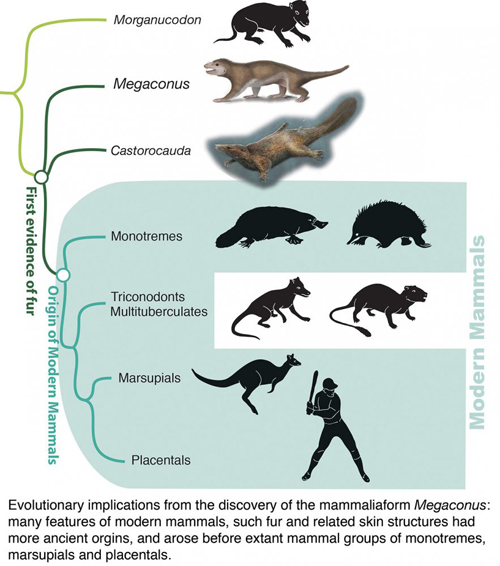 Megaconus is an extinct relative of modern mammals, classified as a “proto-mammal” on the family tree. The 165 million-year-old fossil has exquisitely preserved features, such as hair, which show that its features can be traced back to more distant mammalian ancestors. Image courtesy of Luo Lab

Preserved in the fossil is a clear halo of guard hairs and underfur residue, making Megaconus only the second known pre-mammalian fossil with fur. It was found with sparse hairs around its abdomen, leading the team to hypothesize that it had a naked abdomen. On its heels, Megaconus possessed a long keratinous spur, which was possibly poisonous. Similar to spurs found on modern egg-laying mammals, such as male platypuses, the spur is evidence that this fossil was most likely a male member of its species.

“Megaconus confirms that many modern mammalian biological functions related to skin and integument had already evolved before the rise of modern mammals,” said Luo, who was also part of the team that first discovered evidence of hair in pre-mammalian species in 2006. 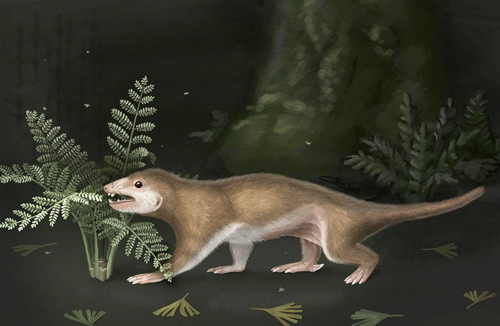 Megaconus was a nocturnal animal, foraging mostly at night. It lived on the shores of a shallow freshwater lake in what is now the Inner Mongolia Region of China. Art by April Isch

However, Luo and his team identified clear non-mammalian characteristics as well. Its primitive middle ear, still attached to the jaw, was reptile-like. Its anklebones and vertebral column are also similar to the anatomy of previously known mammal-like reptiles.

“We cannot say that Megaconus is our direct ancestor, but it certainly looks like a great-great-grand uncle 165 million years removed. These features are evidence of what our mammalian ancestor looked like during the Triassic-Jurassic transition,” Luo said.

“Megaconus shows that many adaptations found in modern mammals were already tried by our distant, extinct relatives. In a sense, the three big branches of modern mammals are all accidental survivors among many other mammaliaform lineages that perished in extinction,” Luo added. 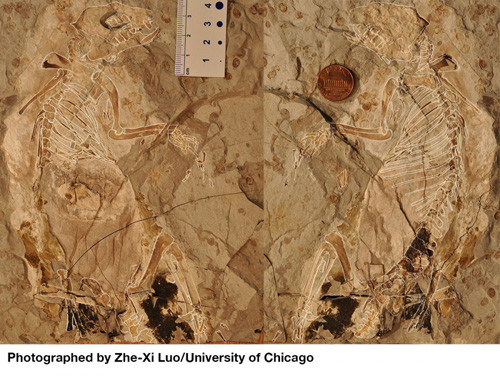 Megaconus mammaliaformis is preserved as a slab (left) and a counter-slab (right) of shale deposited in a shallow lake. Megaconus is the first skeletal fossil of a mammaliaform group otherwise only known by their teeth, but with a long history extending back to the Late Triassic period. Photo by University of Chicago, Zhe-Xi Luo 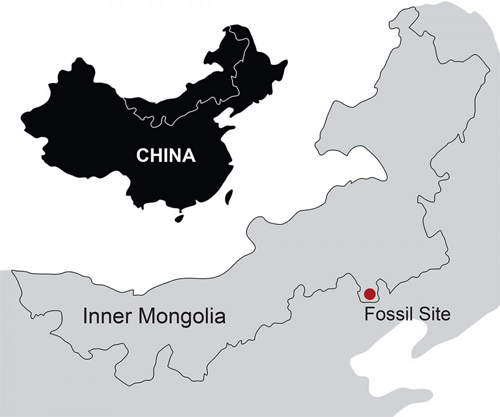