On Monday morning — Labor Day — first-year students gathered in classrooms around campus for their First Readings seminars. The program, initiated at Brown seven years ago, is designed to give new students a common reading experience and prepare them for college life.

PROVIDENCE, R.I. [Brown University] — Classes don’t officially begin until Wednesday, but first-year students got their first taste of academic life at Brown on the first Monday in September, when all 1,537 of them gathered in classrooms around campus for the annual First Readings seminars.

Just before 9 a.m. on the muggy, overcast morning, students were trickling into a room on the second floor of J. Walter Wilson. Omer Bartov, professor of history who was leading that room’s discussion, waited patiently as latecomers arrived. Several students who’d confused the correct building with Wilson Hall ran in at the last minute, breathing a sigh of relief to discover their names on the roster and that they were finally in the right place.

Bartov directed students to arrange their seats in a circle — “So I don’t feel like a bus driver” — and then asked the group to introduce themselves. Each of the 18 students said their name, where they were from, and their intended concentration, revealing a diverse range of interests, from engineering and economics to art and environmental studies. Geographically, they spanned the globe, hailing from as far as Hong Kong and South Korea and several U.S. states, including Florida, New York and Illinois. 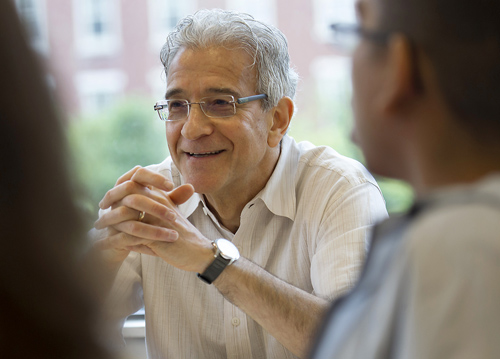 In conversation with Beautiful Souls. Omer Bartov was among nearly 90 faculty and staff who convened First Reading seminars for the Class of 2017. The entire freshman class read the same book; the discussion sessions provided a taste of college life. Image credit: Photos by Mike Cohea/Brown University

Each clutched a copy of Beautiful Souls: The Courage and Conscience of Ordinary People in Extraordinary Times by Eyal Press, a 1992 Brown graduate. It was this summer’s assigned book for the First Readings program. Started seven years ago, First Readings is designed to give new students a common reading experience and prepare them for college life. Each first-year student receives a copy of the assigned book over the summer and is asked to write a letter to their academic advisor explaining an aspect of the book they found most compelling or relatable. When they arrive on campus, students attend a seminar during orientation weekend to discuss the book. This year, nearly 90 members of the Brown faculty and adminstration volunteered to lead seminars, including President Christina Paxson.

Beautiful Souls tells the tale of four people who did what they considered the right thing under trying circumstances: a Swiss border guard who smuggled Jews in against policy, a Serbian who misidentified Croats to save them from torture, an Israeli commando who refused to continue to protect what he felt were illegal settlements, and a broker who caught wind of a Ponzi scheme.

The students in Bartov’s seminar said they enjoyed the book and thought it was a good way to kick off their time at Brown.

“I didn’t expect to like the book at first, but when I read it, I thought it was an awesome book. It made me more excited to come to Brown,” said Hayley Bounds, a neuroscience concentrator from Chicago.

The discussion Monday began with the topic of nonconformism and what it would take to act upon an injustice like the characters in the book.

“There are generally very few incentives to not conform,” said another. “There’s very little personal gain besides moral satisfaction.” 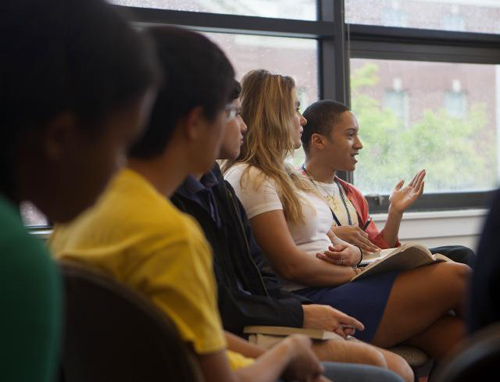 Events, both historic and current, made their way into the conversation. When Bartov asked the group whether they could think of instances of conflict between two authorities, one student brought up Russia’s recent passing of anti-LBGTQ laws and how they might affect the upcoming Olympics. Bartov compared the situation to the 1938 Olympics in Berlin, when Hitler tried to ban Jews and blacks from participating in the games.

Other topics included the role of media in social justice, patriotism, and what it means to be a citizen of the world.

“I really enjoyed the discussion. I thought it was a good way to start the type of education that we’re going to get here at Brown,” said Dan Harwood, a biomedical engineering concentrator from New York.

Toward the end of the seminar, Bartov asked students to reflect on how the issues presented in the book might influence how they spend their time at Brown.

“I hope I’ll gain more empathy by meeting people from all over the world, making more of a connection, and gaining a better idea of political citizenship, rather than only thinking about the place I’ve lived my entire life,” one student said.

With that, Bartov left the students with some parting words before sending them off to start their first week as college students.

“Empathy is at the core of this book and at the heart of any humanist education. Education combines two factors: Empathy and knowledge, and you need both for a complete education. It’s hard to feel empathy for something you know nothing about and it’s hard to fully understand something without a sense of empathy.”