The science behind the tingling sensation caused by eating a popular Asian spice has been explained by researchers at UCL.

The study, which is published in the journal Proceedings of the Royal Society B, helps shed light on the complex interactions between the senses of taste and touch, and could lead to a greater understanding of the causes of the tingling sensations experienced by many chronic pain patients.

Widely used in Asian cooking, the Szechuan pepper was found to mimic the sense of touch in the brain. It chemically activates light-touch fibres on the lips and tongue and sends the equivalent of 50 light taps to the brain per second.

Dr Nobuhiro Hagura (UCL Institute of Cognitive Neuroscience), lead author of the study, said: “This is the first time that we’ve been able to show how chemicals activate touch fibres, inducing a measurable frequency.

“We know that natural products like chilli, mustard oil and menthol can activate the thermal and pain fibres in the skin, but we wanted to find out why Szechuan pepper specifically works on the light-touch fibres, producing a conscious sensation of touch and that distinctive tingling feeling.” 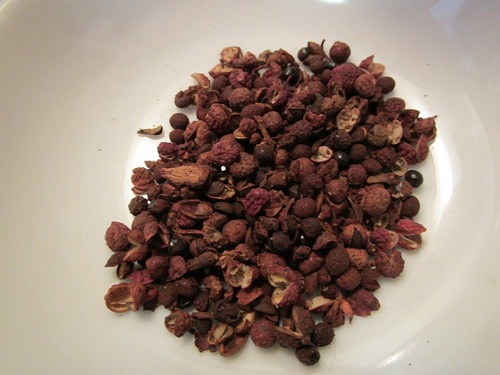 After Szechuan pepper was applied to the lips of volunteers, participants were asked to match the frequency of the resulting tingling sensation by adjusting a vibrating stimulus, either higher or lower, on their fingertips.

The team was able to show that an active ingredient in the peppers stimulates specific RA1 fibres in the lips and tongue. These fibres are responsible for transmitting touch sensation, and send the equivalent of a light tap on the skin to the brain at the rate of 50 times per second.

Dr Hagura said: “What we found was that a unique active ingredient in the pepper, called sanshool, activates these fibres, sending a highly specific signal to the brain. Szechuan peppers and physical touch sensations share this same pathway to the brain.

“We hope that laboratory studies of the tingling sensations caused by sanshool could help to clarify the brain processes underlying these sensations, and how they are related to pain in some cases.”

The team also hopes to investigate the reasons why people enjoy eating Szechuan pepper and how touch sensation can boost the taste of food.