Clark began working with a mentor in the UA Mel and Enid Zuckerman College of Public Health and county officials to learn about the seasonality of rabies in animals and identify exactly where rabid animals were most often found.

While rabies cases in humans are rare, the data Clark studied indicated that 37 people encountered rabid animals in Pima County from 2004 to 2010. Clark is now devising public education messaging to reduce instances of human contact.

“Overall, my public health goal is to implement health education for kids where there are hot spots for rabies,” said Clark, an Arizona Assurance scholar and public health senior.

Known hot spot exist, for example, at certain points on Mount Lemmon and at the southern tip of Pima County, he noted. 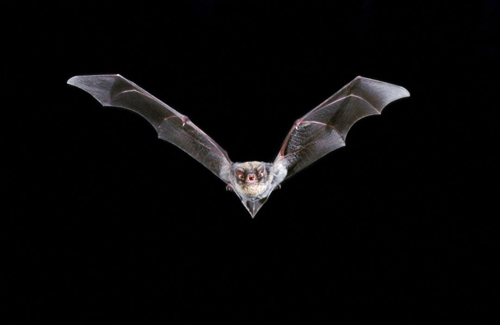 When it comes to rabies in this region, bats get all the attention. But Robert Clarks’ research indicates that people should also learn more about the risks associated with rabies-infected skunks and foxes. (Photo credit: Ivan Kuzmin via the National Science Foundation)

Rabies, a viral disease, is transmitted through the bite of rabid animals and results in a fever, headache, weakness and, at times, paralysis and hallucinations, according to the the U.S. Centers for Disease Control and Prevention reports. Reliable rabies vaccines exist for humans, but left untreated, rabies can cause death.

“Death usually occurs within days of neurologic symptoms appearing; cases may contract rabies at time of exposure or bite, but the incubation period – the time between exposure and case exhibiting symptoms – may vary from 21 days to many months,” said Michael Acoba, the Epidemiology Program Division manager for the Pima County Health Department.

The vast majority of animal cases of rabies reported to the CDC occur in wildlife, specifically wild carnivores and bats, and not domesticated animals, the agency reports.

“It used to be in this country that we talked a lot about rabid dogs and cats. Then, we required vaccinations in every state to protect you and your pet. Now we’ve shifted and changed our public health message because of the success of such actions,” said Heidi Brown, an assistant professor in the UA’s Epidemiology and Biostatistics Division and Clark’s mentor.

“There are a lot of other diseases out there, but rabies is a scary disease,” Brown said. “And there is good reason for it – it is a very expensive disease and there is decent merit to be concerned about it. Untreated, the fatality rate is essentially 100 percent, and because of that, we have to strengthen the buffer between us and wildlife.”

Clark believes more preventative work can be done, and he believes it begins with public health information targeting younger populations. 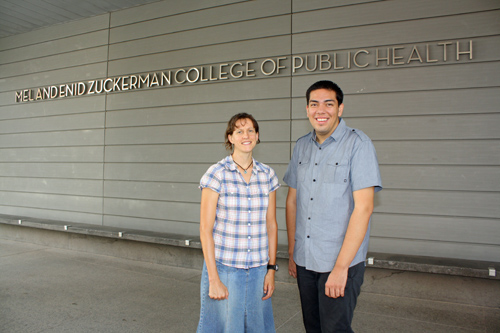 Heidi Brown, who mentors Robert Clark, said “I have been super impressed with Robert. In one semester, he taught himself GIS, which is a program that stumps a lot of people, and developed a nice database allowing us to pick up a lot of information over a long period of time. (Photo credit: Beatriz Verdugo/UANews)

In his investigation, he began by developing his skills in using geographic information systems and mapping.

He then turned to Pima County data, which contained information about report dates, the location of the animal pick-up, the type of species and other information. He was then able to amass a database that spanned 2004 to 2010 and included 443 positive cases of rabid animals, which he then mapped by zip code.

Clark noted that rabies cases reported were overwhelmingly in bats, then skunks and foxes, with the occasional javelina and coyote reported. Most often, the zip codes with the highest numbers of cases had the lowest human populations.

But something else arose in the data that could help inform families and schools, and also individuals who hike and camp in the surrounding mountains.

Standard public messaging around rabies is that the disease is most often found in wildlife, especially in bats, and that people should avoid handling such wildlife, Acoba said.

“That is the safest, broadest message we have,” he said.

Despite the low instances of rabies in humans, Acoba said it’s crucial to continue the study of cases of rabid animals and to improve public education, as medical treatment for rabies remains costly and the disease remains fatal.

“I think his work has reemphasized the importance of educating the public, and particularly kids in schools. That is important,” Acoba said.

“It could be useful to try and characterize the data to see if there are any other details we haven’t seen. Robert has an interest and the capabilities to do that,” he said. “Anything he finds could help add more details to our prevention message.”

While people are well aware that bats may carry rabies, more public education may be needed to raise awareness about skunks and foxes, Clark said.

Clark is continuing his research to identify additional hot spots in the county, but he already has used his research to inform Tucson-area school teachers and nurses. Clark also is developing a curriculum that educators could then use to inform their students about rabies.

“We need to get more education out there,” Clark said, adding that, because of his experience, he intends to also pursue graduate studies. “We need to educate children and remind them that if they see a sick animal, they should let the professionals handle it. ‘Stay away from all wildlife.’ That has to be our message to kids.”