Until now, brain scientists have been almost completely in the dark about how most of the nonspecific thalamus interacts with the prefrontal cortex, a relationship believed to be key in such fundamental functions as maintaining consciousness and mental arousal. Brown University researchers performed a set of experiments, described in the Journal of Neuroscience, to explore and measure those circuits for the first time.

PROVIDENCE, R.I. [Brown University] — Inside the brains of mice and men alike, a relatively big football-shaped region called the thalamus acts like a switchboard, providing the prefrontal cortex, the part that does abstract thinking and decision-making, with most of its information. The thalamus’s responsibility even includes helping the prefrontal cortex to maintain consciousness and arousal.

Essential as this “thalamocortical” partnership is, neuroscientists have understood very little about the connections coming from a matrix of cells in the so-called “nonspecific thalamus,” where information other than from the senses is relayed. In a new paper published Dec. 5, 2012, in the Journal of Neuroscience, Brown University researchers report the first direct measurements in mice of cause-and-effect responses between the key thalamus cells in that matrix and those in the prefrontal cortex.

“These thalamic areas comprise the vast majority of the thalamus, but we know virtually nothing about the physiology of how they control [the] cortex,” said one of the lead authors, Scott Cruikshank, assistant professor (research) of neuroscience at Brown. 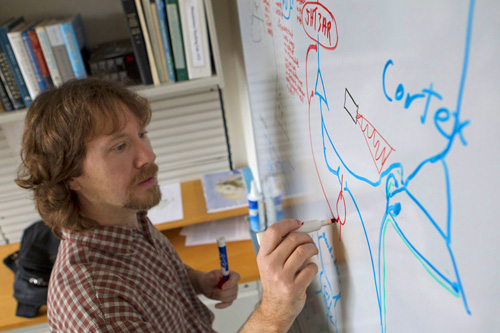 An essential thalamocortical partnership. It’s not just the contact between the thalamus and prefrontal cortex that’s important; it’s the nature of those contacts at different layers of the cortex that allows the thalamus a measure of control. Scott Cruikshank and colleagues used optogenetic techniques to make their findings. Image Credit: Mike Cohea/Brown University

Among the team’s findings is that the nonspecific thalamus signals are most strongly received, at least at first, by inhibitory neurons in the outermost layer of cortex (layer 1). Neuroscientists had assumed that these signals instead mainly poured into excitatory cells of the cortex. It is only over time, with repetition of the thalamic signals, that the inhibitory layer 1 cells respond less strongly while the excitatory cells maintain a steady response. The result is a pattern in which the net effect of the thalamus signals is inhibitory in the cortex at first, but eventually gives way to a steadier, more even state of excitation over a few hundred milliseconds.

That ultimately sustained pattern of activation stands in stark contrast to the way the sensory signals from the specific thalamus play out in the cortex. The resulting excitation in those circuits starts out strong and then weakens with repetition — consistent with how people cease to notice sights, smells, and other sensory inputs after a while if they don’t change. 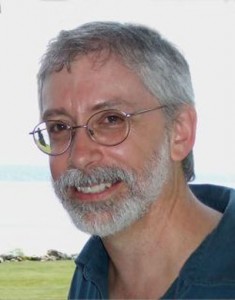 Barry Connors. A steady state of neuronal excitement could be related to the maintenance of baseline of consciousness or attention. Image Credit: Brown University

A large part of the reason why neuroscientists didn’t know this before is because the measurements that Cruikshank and his co-authors made were difficult, if not impossible, to perform using traditional electrical stimulation and recording techniques. Once mouse brain tissue is sliced up, the long connections that the thalamus sends to the cortex, called axons, are severed. Electrically stimulating the axons where they connect to cortex cells, but nothing else around them, was impossible to do.

Meanwhile the researchers recorded the electrical activity of the various cortical cells the thalamic axons connected to, to see how they responded to stimulation of the thalamic axons. Sometimes the researchers recorded just the layer 1 inhibitory neurons, sometimes they recorded just the deeper-layered excitatory neurons and sometimes they recorded the different neurons’ responses simultaneously. Notably, the outer-layer and deeper-layer cortical neurons are connected to each other as well.

The key results were measurements showing that the inhibitory outer-layer neurons, known as “layer 1 interneurons,” have a roughly three-times stronger initial response to the thalamic signals than the deeper excitatory “pyramidal” neurons did. The responses eventually evened out, leading to that steady-state excitement over time.

Cruikshank said the team does not yet know what the behavioral significance of that steady state is, but it could be related to the maintenance of a baseline of consciousness or attention, perhaps to keep the prefrontal cortex ready to accept and process information from other sources, such as sensory signals. Prior experiments have shown that when the nonspecific thalamus is damaged, subjects can fall into a coma, but that when the nonspecific thalamus is stimulated the cortex becomes more aroused.

Now, at least, neuroscientists know how that connection is being made.

In addition to Cruikshank, Ahmed, and Connors, the paper’s other authors are Tanya Stevens, Saundra Patrick, Amalia Gonzalez, and Margot Elmaleh. Gonzalez and Elmaleh are former undergraduates whose senior honors theses contributed to the paper.