The only way to protect against HIV and unintended pregnancy today is the condom. It’s an effective technology, but not appropriate or popular in all situations.

A University of Washington team has developed a versatile platform to simultaneously offer contraception and prevent HIV. Electrically spun cloth with nanometer-sized fibers can dissolve to release drugs, providing a platform for cheap, discrete and reversible protection.

The research was published this week in the Public Library of Science’s open-access journal PLoS One. The Bill & Melinda Gates Foundation last month awarded the UW researchers almost $1 million to pursue the technology.

“Our dream is to create a product women can use to protect themselves from HIV infection and unintended pregnancy,” said corresponding author Kim Woodrow, a UW assistant professor of bioengineering. “We have the drugs to do that. It’s really about delivering them in a way that makes them more potent, and allows a woman to want to use it.”

Electrospinning uses an electric field to catapult a charged fluid jet through air to create very fine, nanometer-scale fibers. The fibers can be manipulated to control the material’s solubility, strength and even geometry. Because of this versatility, fibers may be better at delivering medicine than existing technologies such as gels, tablets or pills. No high temperatures are involved, so the method is suitable for heat-sensitive molecules. The fabric can also incorporate large molecules, such as proteins and antibodies, that are hard to deliver through other methods. 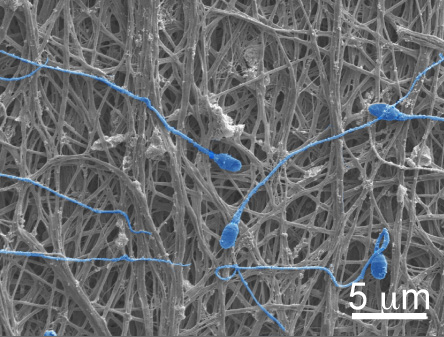 The electrospun fibers can release chemicals or they can physically block sperm, as shown here. Image credit: Kim Woodrow, UW

They first dissolved polymers approved by the Food and Drug Administration and antiretroviral drugs used to treat HIV to create a gooey solution that passes through a syringe. As the stream encounters the electric field it stretches to create thin fibers measuring 100 to several thousand nanometers that whip through the air and eventually stick to a collecting plate (one nanometer is about one 25-millionth of an inch). The final material is a stretchy fabric that can physically block sperm or release chemical contraceptives and antivirals.

“This method allows controlled release of multiple compounds,” Ball said. “We were able to tune the fibers to have different release properties.” 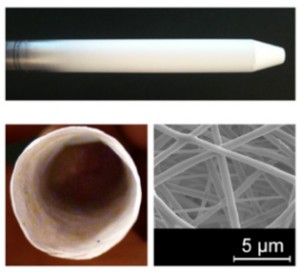 Fibers stick to a hard surface (top) and then can be removed to create a hollow ring (bottom left). Bottom right shows a closeup of the tiny fibers. Image credit: Kim Woodrow, UW

One of the fabrics they made dissolves within minutes, potentially offering users immediate, discrete protection against unwanted pregnancy and sexually transmitted diseases.

Another dissolves gradually over a few days, providing an option for sustained delivery, more like the birth-control pill,  to provide contraception and guard against HIV.

The fabric could incorporate many fibers to guard against many different sexually transmitted infections, or include more than one anti-HIV drug to protect against drug-resistant strains (and discourage drug-resistant strains from emerging). Mixed fibers could be designed to release drugs at different times to increase their potency, like the prime-boost method used in vaccines.

The electrospun cloth could be inserted directly in the body or be used as a coating on vaginal rings or other products.

Electrospinning has existed for decades, but it’s only recently been automated to make it practical for applications such as filtration and tissue engineering. This is the first study to use nanofibers for vaginal drug delivery.

While this technology is more discrete than a condom, and potentially more versatile than pills or plastic or rubber devices, researchers say there is no single right answer.

“At the time of sex, are people going to actually use it? That’s where having multiple options really comes into play,” Krogstad said. “Depending on cultural background and personal preferences, certain populations may differ in terms of what form of technology makes the most sense for them.”

The team is focusing on places like Africa where HIV is most common, but the technology could be used in the U.S. or other countries to offer birth control while also preventing one or more sexually transmitted diseases.

The research to date was funded by the National Institutes of Health and the UW’s Center for AIDS Research. The other co-author on the paper is Thanyanan Chaowanachan, a UW postdoctoral researcher and longtime HIV expert.

The team will use the new Gates Foundation grant to evaluate the versatility and feasibility of their system. The group will hire more research staff and buy an electrospinning machine to make butcher-paper sized sheets. The expanded team will spend a year testing combinations that deliver two antiretroviral drugs used to treat HIV and a hormonal contraceptive, and then six months scaling up production of the most promising materials.