They won’t be coming soon to a multiplex near you, but movies showing the growth of platinum nanocrystals at the atomic-scale in real-time have blockbuster potential. A team of scientists with the Lawrence Berkeley National Laboratory (Berkeley Lab) and the University of California (UC) Berkeley has developed a technique for encapsulating liquids of nanocrystals between layers of graphene so that chemical reactions in the liquids can be imaged with an electron microscope. With this technique, movies can be made that provide unprecedented direct observations of physical, chemical and biological phenomena that take place in liquids on the nanometer scale.

“Watching real-time chemical reactions in liquids at the atomic-scale is a dream for chemists and physicists,” says Jungwon Park, a member of the team who holds joint appointments with Berkeley Lab’s Materials Sciences Division and UC Berkeley’s chemistry department. “Using our new graphene liquid cell, we’re able to capture a small amount of liquid sample under a high vacuum condition for taking real-time movies of nanoparticle growth reactions. Since graphene is chemically inert and extremely thin, our liquid cell provides realistic sample conditions for achieving high resolution and contrast.”

In this first ever atomic-scale real-time movie of nanocrystal growth in liquid, which was made at TEAM I of the National Center for Electron Microscopy, nanoparticles of platinum move and diffuse freely in liquid to coalesce into crystals along a specific direction. Faceting of the particles is also captured as they evolve into a crystalline shape.  (Courtesy of Berkeley Lab).

Park was the lead author, along with Jong Min Yuk, of a paper in the journal Science that describes this research titled “High-Resolution EM of Colloidal Nanocrystal Growth Using Graphene Liquid Cells.” The research was done as a collaboration between the research groups of Paul Alivisatos, director of Berkeley Lab and UC Berkeley’s Larry and Diane Bock Professor of Nanotechnology, and Alex Zettl, who holds joint appointments with Berkeley Lab’s Materials Sciences Division and UC Berkeley’s Physics Department where he directs the Center of Integrated Nanomechanical Systems. Both are corresponding authors of the Science paper along with Jeong Yong Lee of Korea’s Advanced Institute of Science and Technology (KAIST). Other authors were Peter Ercius, Kwanpyo Kim, Daniel Hellebusch and Michael Crommie.

In using a beam of electrons rather than a beam of light for illumination and magnification, electron microscopes can “see” objects hundreds and even thousands of times smaller than what can be resolved with an optical microscope. However, electron microscopes can only operate in a high vacuum as molecules in the air disrupt the electron beam. Since liquids evaporate in high vacuum, liquid samples must be hermetically sealed in special solid containers – called cells – with a viewing window before they can be imaged in an electron microscope. Until now, such liquid cells have featured viewing windows made from silicon nitride or silicon oxide. While this has permitted studies of some nanoscale phenomena in liquids, the silicon-based cell windows are too thick to allow strong penetration by the electron beam and this has limited resolution to only a few nanometers. In addition to not allowing true atomic-resolution, the thick silicon-based cell windows also appear to perturb the natural state of the liquid or sample suspended in the liquid. 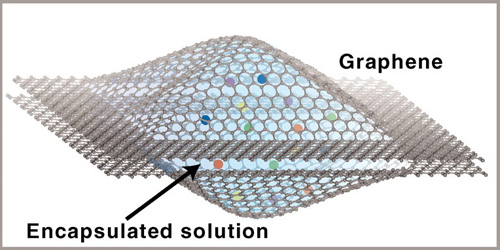 In the graphene liquid cell, opposing graphene sheets form a sealed liquid nanoscale reaction chamber that is transparent to an electron microscope beam. The cell allows nanocrystal growth, dynamics and coalescence to be captured in real time at atomic resolution via a transmission electron microscope. Image credit: Berkeley Lab

“Graphene is single carbon atom in thickness, making it one of the thinnest known membranes,” says Park, a member of the Alivisatos’ research group. “It does not scatter the electron beam but lets it pass through. Furthermore, graphene is also very strong and impermeable, as well as being chemically non-reactive, and this helps protects the sample in the liquid cell from the high-energy beam of an electron microscope.”

To make their graphene liquid cell, the Alivisatos-Zettl collaboration encapsulated a platinum growth solution between two laminated graphene layers that were suspended over holes in a conventional transmission electron microscope (TEM) grid. The graphene was grown on a copper foil substrate via chemical vapor deposition and then directly transferred onto a gold TEM mesh with a perforated amorphous carbon support. The platinum growth solution was pipetted directly atop two graphene-coated TEM grids facing in opposite directions. 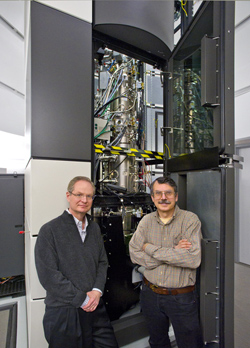 Berkeley Lab director Paul Alivisatos (left) and physicist Alex Zettl at TEAM I, the world’s most powerful electron microscope, where a they led a collaboration that produced the first atomic-scale, real-time movies of nanocrystal growth in liquids. (Photo by Roy Kaltschmidt, Berkeley Lab)

To test their graphene liquid cells, the collaborators used the world’s most powerful electron microscope, the TEAM I at the National Center for Electron Microscopy (NCEM), which is housed at Berkeley Lab. TEAM stands for Transmission Electron Aberration-corrected Microscope and the TEAM I instrument is capable of producing images with a half-angstrom resolution, which is less than the diameter of a single hydrogen atom. With TEAM I and their new graphene liquid cells, the Alivisatos-Zettl collaboration was able to directly observe at the highest resolution possible to date and with minimal sample perturbation, the growth of nanocrystals of platinum, one of the best metal catalysts in use today.

“Direct atomic-resolution imaging allowed us to visualize critical steps in the platinum nanocrystal growth process, including a host of previously unexpected phenomena, such as site-selective coalescence, structural reshaping after coalescence, and surface faceting,” says Park.

Three years ago, Park and Alivisatos were part of a team that used another TEM at NCEM and liquid cells featuring silicon nitride windows to record the first ever images of colloidal platinum nanocrystals growing in solution at subnanometer resolution. Their results showed that while some crystals in solution grew steadily in size via classical nucleation and aggregation – meaning molecules collide and join together – others grew in fits and spurts, driven by “coalescence events,” in which small crystals randomly collide and fuse together into larger crystals. Despite their distinctly different growth trajectories, these two processes ultimately yielded nanocrystals of approximately the same size and shape.

“In that earlier study, however, we lacked the resolution to fully understand how these nanoparticles merge and reorganize their shape in the coalescence growth trajectory,” Park says. “With the graphene liquid cells we used in this study, we were able to resolve the oriented coalescence along a specific crystal direction and see how they reorganized their overall structure into a final shape.” 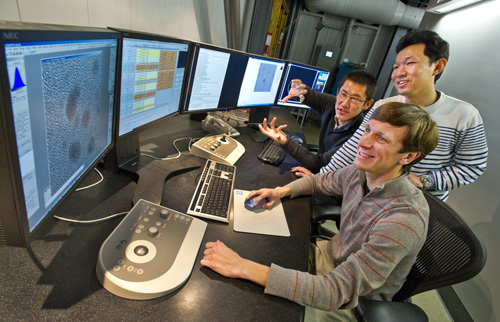 Peter Ercius, Kwanpyo Kim and Jungwon Park at the TEAM I monitor workstation, which is housed in the National Center for Electron Microscopy, where they tested their graphene liquid cells for imaging nanoscale materials in solution. (Photo by Roy Kaltschmidt, Berkeley Lab)

With the graphene liquid cells and the greater resolution of TEAM I, the Alivisatos-Zettl collaboration was able to observe that most coalescence events proceed along the same crystallographic direction – the {111} plane of the crystal. This points to a specific nanocrystal orientation for coalescence not seen before in metal nanoparticles.

“We were able to resolve atomistic arrangement at the moment two of the platinum nanoparticles merged and visualize oriented attachment, a phenomenon known to be one the of major growth mechanisms of anisotropic particles,” Park says. “This oriented coalescence could be one of the formation mechanisms behind another phenomenon we observed, twin boundaries, which occurs when nanoparticles merge together along the same {111} direction but on a mirror plane in the crystal.”

In the future, the collaborators plan to use their graphene liquid cells to study the growth of many different types of nanoparticles, including metals, semiconductors and other useful materials. The graphene cells could also be applied to biomaterials, such as DNA and proteins, which exist naturally in solution.

“The one atom thick graphene membranes are ideal for liquid encapsulation,” says co-author Ercius, the NCEM staff member who ran the TEAM I microscope for this study. “When combined with the aberration corrected imaging of TEAM I, we can reach the ultimate in image contrast and resolution for in-situ liquid experiments. The graphene liquid cell technique could be easily applied to other electron microscopes and I think it will become instrumental in answering questions regarding the synthesis of materials in liquids at the atomic scale.”

This work was supported by the U.S. Department of Energy’s Office of Science, and in part through the National Research Foundation of Korea.