Mention biofuels and most people think of corn ethanol. Some may think of advanced biofuels from switchgrass or miscanthus. But tobacco? Not likely.

That could change. A team of scientists led by a researcher from the U.S. Department of Energy’s Lawrence Berkeley National Laboratory (Berkeley Lab) is exploring a way to produce gasoline, diesel, and jet fuel from the iconic plant of the South.

Their goal is to engineer tobacco plants that use energy from sunlight to produce fuel molecules directly in their leaves. The leaves would then be crushed, and the fuel extracted and separated. The scientists estimate that about 1000 acres of tobacco could yield more than one million gallons of fuel.

Why tobacco? It’s grown in large tracts throughout the U.S and in more than 100 countries. It generates multiple harvests per year, its large leaves could store a lot of fuel, and it’s amenable to genetic engineering.

But before you fill up with gas squeezed from tobacco, the scientists must first get through a long checklist of pioneering research. Success could give the nation a new source of transportation fuel. 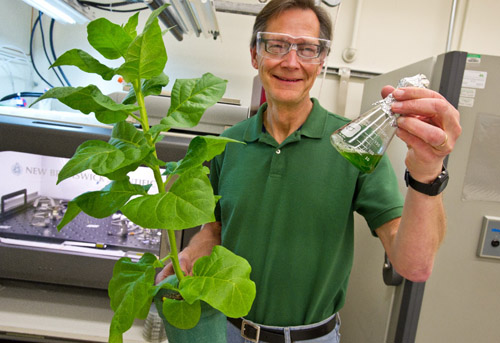 It'll take some doing, but Berkeley Lab's Christer Jansson and others hope to create a new recipe for biofuels. The idea is to take hydrocarbon-synthesizing genes from cyanobacteria (in the flask) and introduce them into tobacco plants. Jansson will discuss the project at the Feb. 27-29 ARPA-E Energy Innovation Summit. Image credit: Berkeley Lab

If this sounds promising—albeit a bit of a long shot—that’s by design. The $4.9 million project is funded by DOE’s Advanced Research Projects Agency-Energy (ARPA-E), which focuses on “high risk, high payoff concepts—technologies promising genuine transformation in the ways we generate, store and utilize energy.”

The project is led by Christer Jansson, a plant biochemist with Berkeley Lab’s Earth Sciences Division. He’ll discuss the project at the 3rd Annual ARPA-E Energy Innovation Summit, to be held February 27-29 near Washington, D.C.

Jansson will be joined at the summit by other Berkeley Lab scientists who’re pursuing ARPA-E projects, all potential game-changers. These include a way to quickly discover materials that capture CO2 from power plant emissions, an innovative method to produce biofuel from microbes, and the development of a low-cost flow battery for the grid that could boost the adoption of renewables. 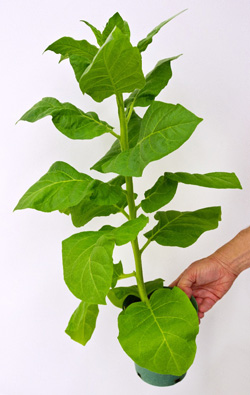 In the tobacco-to-fuels project, Jansson and his collaborators want to create a shortcut in the way in which solar energy is converted to biofuel. Today, one approach to advanced biofuel production requires deconstructing biomass and then using microbes to ferment the resulting sugars into fuel. In contrast, the team hopes to create a plant that grabs CO2 from the air and converts the carbon into a fuel that’s almost ready for the tank.

“We want to bypass downstream processes like fermentation and produce fuels directly in the crop,” says Jansson. “After the biomass is crushed, we could extract the hydrocarbon molecules, and crack them into shorter molecules, creating gasoline, diesel, or jet fuel.”

To get there, the scientists will work to create tobacco plants that are optimized to take in CO2, harvest sunlight, and produce hydrocarbon molecules.

For the latter, Jansson will start with cyanobacteria genes that encode for enzymes which produce alkane, a type of hydrocarbon. He’ll then make synthetic versions of these genes that are suited for expression in tobacco. In another approach, Tasios Melis, a UC Berkeley biologist, will conduct a similar exercise with green algae genes that produce isoprenoids, another type of hydrocarbon.

These genes will be introduced into tobacco plants grown by UC Berkeley scientist Peggy Lemaux. Nuclear magnetic resonance imaging of the leaves by UC Berkeley chemist David Wemmer will enable the scientists to spot any carbon bottlenecks in the plant and refine their metabolic engineering. In addition, Cheryl Kerfeld, a scientist at DOE’s Joint Genome Institute, will search the genomes of hundreds of cyanobacteria species for other alkane-producing genes that could also prove useful.

The scientists also want to get as much carbon into the tobacco plant as possible to maximize hydrocarbon production. Ordinary tobacco “fills up” with CO2 very quickly. To increase the plant’s carbon uptake, the team will again turn to cyanobacteria, which are very efficient at grabbing carbonate from the surrounding water and transporting it into the cell. Jansson hopes to insert cyanobacteria genes that facilitate this carbon transport into the chloroplasts of tobacco plants.

Melis and UC Berkeley scientist Kris Niyogi will also work to enhance tobacco’s use of light during photosynthesis. Melis will use a technique he developed that enables the manipulation of a plant’s light-harvesting mechanisms.

The team hopes to grow their first plant in about 18 months. Their ultimate goal is a plant in which between 20 and 30 percent of its dry weight is hydrocarbon. Promising plants will be grown in Kentucky in a pilot test overseen by the Kentucky Tobacco Research and Development Center, whose scientists will explore ways to optimize the plants’ growth and harvest conditions.