A onetime top 10-ranked “Halo” player, Alex Hebert-Ruiz is now at Microsoft, where she advocates for Xbox LIVE Arcade games when she’s not playing “Halo 4.”

It was the Christmas she got a Barbie house and her brother got a Nintendo. She was 6, and she was hooked – on her brother’s gift.

“Don’t get me wrong, I loved my Barbie house,” she says, “but beating him at Duck Hunt was one of the great challenges of my young life.”

The little girl who grew up loving video games would go on to become a globe-trotting, world-renowned professional “Halo” player, a video game developer, and eventually a Microsoft employee working at Microsoft Studios at Xbox headquarters. 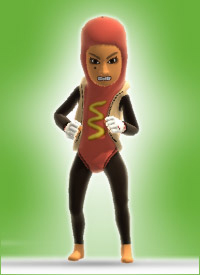 “The opportunity came up for me to work at Microsoft and it was too big of a thing to pass up,” says Hebert-Ruiz, whose gamertag is “XBLA Tart.”

“Every day, you come to work and everybody’s smart. It’s an exhilarating feeling to work with so many talented people,” says Hebert-Ruiz, who is known as a practical joker who puts hot sauce on everything and who will eat anything.

“It’s not unusual to come to work and see her eating a full can of black olives covered in Crystal Hot Sauce for breakfast,” says her manager Chris Charla, portfolio director for Xbox LIVE Arcade. “She’s hardcore.”

Hebert-Ruiz was hired to help launch Play XBLA, a community website for players to learn more about Xbox LIVE Arcade games. The site just had its first birthday, and Hebert-Ruiz is still working hard to add features and content. She’s also working on a few other exciting things she can’t yet talk about, she says.

“My life is sleep, eat, work, and as much “Halo 4” as I can squeeze in-between,” she says. The former pro “Halo 4” player may no longer compete, but she still tries to log at least 20 hours a week.

Charla says Hebert-Ruiz’s infectious enthusiasm for games and game culture makes her a perfect fit not only for Microsoft Game Studios, but for being one of its key ambassadors to the Xbox LIVE Arcade gaming community.

“Like most people at Microsoft, Alex is a big talent on multiple levels. She has a huge passion for games, as a player and a creator, but she also gets a ton of satisfaction from informing others, which is essential for the community role,” Charla says.

Charla says Hebert-Ruiz is an extraordinarily nice person – until a game of “Halo 4” is fired up in her proximity, at which time she becomes all business. Hebert-Ruiz stopped by Charla’s house after dinner last Christmas, and his dinner guest happened to be Lars Bakken, the multiplayer design lead for “Halo” developer Bungie.

“Obviously he’s a very hardcore “Halo 4” player, so I sort of goaded everyone into a split-screen game,” Charla says. “It was very fun to watch. I won’t say who won, but I definitely lost, and the level of trash-talking was pretty amazing.” 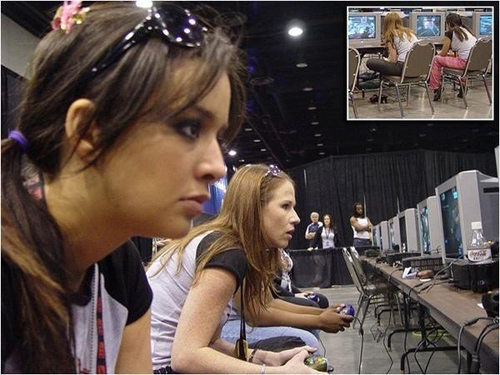 Alex Hebert-Ruiz in the Heat of Competition. Hebert-Ruiz climbed through the ranks of professional “Halo” players, ranking as high as No. 6 in the world in the World Series of Video Games team category for both “Halo 2” and “Halo 3.” Image credit: Microsoft

Growing Up on Gaming, Louisiana Style

Hebert-Ruiz grew up in rural Louisiana on 50 acres of land that has been in her mother’s family since the 1700s. Other family gems: they own a crawfish pond, and her grandfather owns a meat shop that’s renowned for its “turducken” (a deboned turkey that is stuffed with boneless duck and chicken).

She comes from a tightknit clan. Her relatives lived in adjacent houses all built on the family land, and she and her 15 cousins were homeschooled together until high school. After graduating from high school, though Hebert-Ruiz says she comes from a long line of women who “have never had jobs in their lives,” she worked as a racehorse trainer.

In her free time, she and her brother started going to “Halo” tournaments for fun. She performed well, though she found the environment as baffling as the mostly male gamer population seemed to find her. People would say, “You’re a girl and you play video games?”

Until then, it had never occurred to her that being female and a gifted gamer was anything unusual. Her whole family played – girls and boys, moms and dads, cousins and aunts.

“Growing up, all the girls I knew played video games. I had no idea that it was rare,” Hebert-Ruiz says. “Obviously that perception changed rather quickly, but at the time seemed I was entering a surreal universe. It didn’t make any sense.”

In 2006 Hebert-Ruiz joined a women’s gaming team called Pandora Mighty Solidiers (PMS), and in 2007, French video game developer Ubisoft chose her for its all-girl gaming team, “The Frag Dolls.” Hebert-Ruiz and her teammates were flown to competitions and conventions all over the world. They got free laptops, gadgets and gear.

“My mom at first was really skeptical. I think she said, ‘You’ll never meet a doctor this way,’” Hebert-Ruiz says. (Spoiler alert: She never did meet a doctor, but through gamer friends would eventually meet and marry a mechanical engineer.) Her mother eventually decided that it was neat that her daughter got to see the world for free because she was really good at playing a video game.

But it wasn’t all glamour. PMS also worked 14-hour days. They practiced 10 hours a day in the months leading up to a competition, looking for strategies and little things that would give them an edge.

“Just because you’re super good on Xbox LIVE doesn’t mean you’ll be good at a tournament,” she says. “It’s not like sitting on your bed, comfortable, with snacks at hand. There’s noise and pressure. If you lose a bracket, you’re out. You could lose sponsors or teammates.” 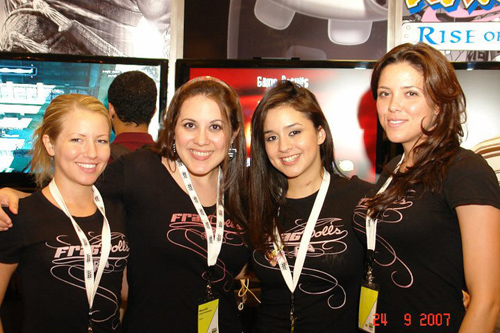 The Frag Dolls. As a member of The Frag Dolls, an all-female gaming team, Herbert-Ruiz (second from right) was flown around the world to compete in “Halo” competitions and at conventions. Image credit: Microsoft

Hebert-Ruiz climbed through the ranks of professional “Halo” players, ranking as high as No. 6 in the world in the World Series of Video Games team category for both “Halo 2” and “Halo 3.” Her PMS team became first all-female team to earn a worldwide ranking.

When she started, she knew every girl at video game competitions. But at the last one she attended, this was not the case, which gives her hope that more and more little girls will grow up to be gamers.

“Finding anyone willing to stay committed to the sport, and willing to dedicate that much time – that’s hard to find in general,” she says.

Hebert-Ruiz left The Frag Dolls for firmer ground, as a game developer at the Texas-based Terminal Reality. There, she immersed herself in the development process and got to work on three games: “Ghostbusters: The Video Game,” “Def Jam Rapstar,” and “Kinect Star Wars.”

Still, in the seven years since she started playing “Halo,” working for Microsoft had always been a dream.

“I think every day is an adventure here,” she says.