Herbivores Dine on Toxic Plants, Thanks to Gut Microbes

Woodrats lost their ability to eat toxic creosote bushes after antibiotics killed their gut microbes. Woodrats that never ate the plants were able to do so after receiving fecal transplants with microbes from creosote-eaters, University of Utah biologists found.

The new study confirms what biologists long have suspected: bacteria in the gut – and not just liver enzymes – are “crucial in allowing herbivores to feed on toxic plants,” says biologist Kevin Kohl, a postdoctoral researcher and first author of the paper published online in the journal Ecology Letters.

The study of woodrats, also known as packrats, raises two concerns, according to Kohl and the study’s senior author, Denise Dearing, a professor and chair of biology:

– Endangered species may lose diversity of their gut microbes when they are bred in captivity. When they are released to the wild, does that leave them unable to consume toxic plants that once were on their menu?

– Livestock like cows often are fed antibiotics to promote growth. Does that impair their ability to eat toxic plants like locoweed when drought reduces pasture grass? 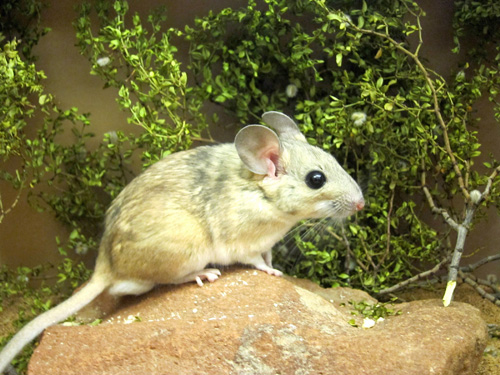 A captive desert woodrat, also known as a packrat, stands on a rock near branches from a toxic creosote bush. A new University of Utah study shows how microbes in the gut play a key role in letting mammals such as woodrats digest and survive on creosote, juniper and other toxic plants. The researchers used antibiotics to kill gut microbes, rendering creosote-eating woodrats unable to digest the plant. They also transplanted feces from woodrats that ate creosote into woodrats that ate juniper. That transplanted fecal gut microbes gave the latter woodrats the ability to digest creosote. Photo Credit: Kevin Kohl, University of Utah

The study of woodrats someday might impact farming practices in arid regions, where toxic plants like creosote and juniper are abundant. Livestock now can’t graze on these cheap food sources. Could interspecies transplants of gut microbes help livestock expand their dining menu? Kohl says he’d like to transplant woodrat gut microbes into sheep or goats to find out if that increases their tolerance to toxic foods.

“Juniper is expanding its range, and ecologists and land managers are concerned,” he says. “Farmers are interested in getting their sheep and goats to eat juniper.”

Evolving a Taste for Toxins

Many plants produce toxic chemicals, which they use as a defense against herbivores, or plant-eating animals. A toxic resin coats the leaves of the creosote bush; juniper toxins are found inside juniper needles.

Most mammals are herbivores. Some face serious challenges: their bodies must handle up to hundreds of toxic chemicals from the plants they consume each day. “Plant toxins determine which plants a herbivore can eat,” says Kohl. 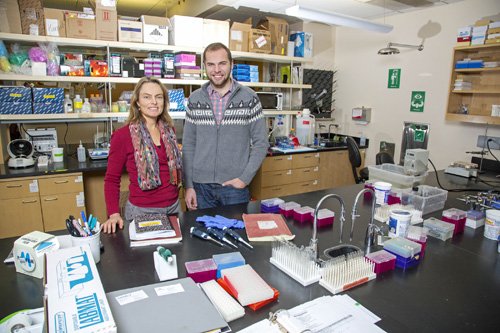 Biology professor Denise Dearing and postdoctoral researcher Kevin Kohl in the University of Utah laboratory where they demonstrated how gut microbes play a crucial role in allowing woodrats and certain other mammals to eat and thrive on toxic plants such as creosote and juniper. Photo Credit: Nick Steffens, University of Utah Marketing and Communication

“In a natural climatic event at the end of the last glacial period, the Southwest dried out and our major deserts were formed,” Dearing says. Creosote, which was native to Mexico, moved north into the Mojave Desert and replaced juniper there, but did not go farther north into Great Basin deserts. Desert woodrats in the Mojave started eating creosote bushes, while desert woodrats in the Great Basin kept eating toxic juniper, to which they had adapted earlier.

At first, the ancient juniper eaters in the Mojave likely were poorly equipped to eat invading creosote, but scientists believe microbes sped up their dietary adjustment. Though slow, evolutionary genetic changes in herbivores play an important role in adapting to new diets. “Transfer of toxin-degrading microbes from one organism to the other is much more rapid,” Dearing says.

How do woodrats get their tiny, but valuable bacterial helpers today?

“Mammals acquire microbes during birth, through contact with their mother’s vaginal and fecal microbes,” Kohl says. “Other possible places to get microbes include leaf surfaces, the soil or feces that woodrats collect from other animals.”

In the new study, Dearing and colleagues performed three experiments using two kinds of woodrats − juniper eaters from the Great Basin desert and creosote eaters from the Mojave Desert. They were captured and kept in the lab on a diet of rabbit chow.

In the first experiment, the scientists studied the relative abundances of gut-microbe genes in two groups of the creosote-eating Mojave woodrats. One group was fed rabbit chow containing 1 percent of creosote resin for two days, followed by rabbit chow with 2 percent of creosote resin for three days. The control group was fed only rabbit chow. Gut microbes were removed from the foreguts of both woodrat groups. DNA was isolated from the microbes to identify genes involved in detoxification.

The scientists found that a woodrat’s diet determines the composition of its gut microbes. “Mammals are adapted to the plant toxins they eat,” Kohl says. The guts of creosote-fed woodrats were teeming with microbes that may degrade creosote, while the guts of creosote-free woodrats had only one-fourth the levels of the same gut microbes.         In the second experiment, the researchers experimentally removed gut microbes to highlight their dietary role in woodrats. Antibiotics kill about 90 percent of the gut microbes in animals, severely impairing their ability to consume toxic foods.

Two groups of woodrats were pretreated with the antibiotic neomycin in their drinking water. One group was placed on a diet of rabbit chow and creosote resin. With their gut microbes killed by the antibiotic, they were unable to feed on creosote and lost 10 percent of their body weight within 13 days. The second group ate only rabbit chow and didn’t lose weight, showing that killing their gut microbes didn’t harm them because they weren’t eating toxic creosote.

Woodrats naturally eat their own and other woodrats’ feces. So in the experiment, juniper-eating Great Basin woodrats were fed rabbit chow mixed with feces either from other juniper eaters or from creosote-eating Mojave woodrats.  Both woodrat groups then were challenged with a creosote diet.

But in juniper eaters that consumed the feces of creosote eaters, their newly acquired gut microbes likely detoxified most of the creosote, taking the burden off of liver enzymes.