A large pad of fat cells that extends from the stomach and covers the intestines provides nutrients that promote the spread and growth of ovarian cancer, reports a University of Chicago-based research team in the journal Nature Medicine, published online Oct. 30.

Ovarian cancer, the fifth-leading cause of cancer deaths in women, tends to spread within the abdominal cavity as opposed to distant organs. In 80 percent of women, by the time ovarian cancer is diagnosed, it has spread to the pad of fat cells, called the omentum. Often, cancer growth in the omentum exceeds the growth of the original ovarian cancer. 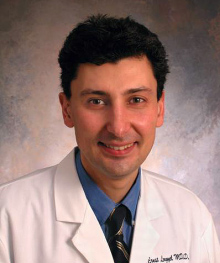 “This fatty tissue, which is extraordinarily rich in energy-dense lipids, acts as a launching pad and energy source for the likely lethal spread of ovarian cancer,” said study author Ernst Lengyel, professor of obstetrics and gynecology at UChicago. “The cells that make up the omentum contain the biological equivalent of jet fuel. They feed the cancer cells, enabling them to multiply rapidly. Gaining a better understanding of this process could help us learn how to disrupt it.”

The researchers performed a series of experiments to identify the role of these fat cells as major mediators of ovarian cancer metastasis. The first step was to understand the biological signals that attract ovarian cancer cells to the omentum and use it for rapid growth.

Once ovarian cancer cells reach the omentum, they quickly develop the tools to devour the sustenance provided by this fatty tissue, reprogramming their metabolism to thrive on lipids acquired from fat cells. Ovarian cancer can rapidly convert the entire omentum, a soft fat pad, into a solid mass of cancer cells.

“This mechanism may not be limited to ovarian cancer cells,” the authors note. Fat metabolism also may contribute to cancer development in other environments where fat cells are abundant, such as breast cancer.

A protein known as fatty acid binding protein (FABP4), a fat carrier, may be crucial to this process and could be a target for treatment.

When they inhibited FABP4, the transfer of nutrients from fat cells to cancer cells was drastically reduced. Inhibition of FABP4 also reduced tumor growth and the ability of tumors to generate new blood vessels.

“Therefore,” the authors wrote, “FABP4 emerges as an excellent target in the treatment of intra-abdominally disseminating tumors, which preferentially metastasize to adipose tissue such as ovarian, gastric and colon cancers.”

The research was supported by the National Institutes of Health, the Burroughs Wellcome Fund, the Committee on Cancer Biology at the University of Chicago and Bears Care, the charitable beneficiary of the Chicago Bears Football Club.