ANN ARBOR, Mich.— The fastest wind ever discovered blowing off a disk around a stellar-mass black hole has been observed by a team of astronomers that includes a University of Michigan doctoral student.

Using NASA’s Chandra X-ray Observatory, an orbiting telescope, they clocked the record-breaking super wind at about 20 million mph, or about 3 percent of the speed of light. This is nearly 10 times faster than astronomers had previously observed from a stellar-mass black hole.

“This is like the cosmic equivalent of winds from a category five hurricane,” said Ashley King, a doctoral student in the Department of Astronomy and lead author of the study published in the Feb. 20 issue of The Astrophysical Journal Letters. “We weren’t expecting to see such powerful winds from a black hole like this.”

The result has important implications for understanding how this type of black hole behaves. Stellar-mass black holes are born when extremely massive stars collapse. They typically weigh between five and 10 times the mass of the sun. 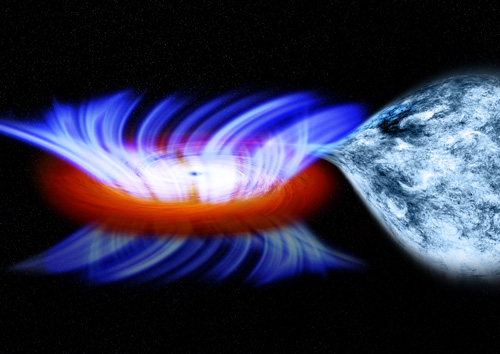 This artist's impression shows a binary system containing a stellar-mass black hole known as IGR J17091 for short. Observations with Chandra have clocked the fastest wind ever seen blowing off a disk around this stellar-mass black hole at about 20 million miles per hour. The wind, which comes from a disk of gas surrounding the black hole, may be carrying away much more material than the black hole is capturing and could be variable over time. This result has important implications for understanding how this class of black hole, which typically weighs between 5 and 10 solar masses, can behave. Image credit: NASA/CXC/M.Weiss

The stellar-mass black hole powering this super wind is known as IGR J17091-3624, or IGR J17091 for short. Located in the bulge of the Milky Way galaxy, about 28,000 light years away from Earth, it is a binary system in which a sun-like star orbits the black hole.

The wind speed in IGR J17091 matches some of the fastest winds generated by supermassive black holes, objects millions or billions of times more massive.

“It’s a surprise this small black hole is able to muster the wind speeds we typically only see in the giant black holes,” said co-author Jon Miller, an associate professor in the Department of Astronomy. “In other words, this black hole is performing well above its weight class.”

Another unanticipated finding is that the wind, which comes from a disk of gas surrounding the black hole, may be carrying away more material than the black hole is capturing.

“Contrary to the popular perception of black holes pulling in all of the material that gets close, we estimate up to 95 percent of the matter in the disk around IGR J17091 is expelled by the wind,” King said.

Unlike winds from hurricanes on Earth, the wind from IGR J17091 is blowing in many different directions. This pattern also distinguishes it from a jet, where material flows in highly focused beams perpendicular to the disk, often at nearly the speed of light.

The high speed for the wind was estimated from a spectrum made by Chandra in 2011. A spectrum is a plot that shows how intense X-rays are at different energies. Molecules emit and absorb distinct features in spectra, which allow scientists to monitor them and their behavior. A Chandra spectrum of iron molecules made two months earlier showed no evidence of the high-speed wind, meaning the wind likely turns on and off over time.

Astronomers believe that magnetic fields in the disks of black holes are responsible for producing the winds.