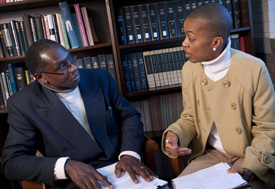 “We want to know how we can improve the language and communication strategies used in HIV/AIDS prevention efforts targeting African-American female college students,” says Dr. Fay Cobb Payton, an associate professor of information systems at NC State and primary investigator (PI) of the project. “Our goal is to help craft messages that will be resonant with these young women,” says Dr. James Kiwanuka-Tondo, an associate professor of communication at NC State and fellow co-PI of the effort.

The National Science Foundation awarded a two-year grant supporting the project, which is being conducted at NC State and Pennsylvania State University.

“Our previous research found a lack of ‘cultural competency’ in online prevention materials,” Kiwanuka-Tondo says. “Meaning the materials were not culturally relevant to the African-American population in general, and women in particular.”

The researchers have already begun conducting focus groups in an effort to define guidelines for prevention content and messaging that is culturally relevant to African-American female students.

“These guidelines will help us develop online content targeting this specific audience,” Payton says. The researchers plan to test the newly developed content and messaging with the focus groups at the beginning of the fall semester.

“This is an iterative process,” Payton says, “and we will incorporate feedback from the focus groups to fine tune these communication tools.”

Meanwhile, co-PI Dr. Lynette Kvasny of Penn State will be leading a similar effort on her campus – which should help the research team identify any regional differences among African-American female students.

The NC State research team also includes Kathy Gore of NC State’s Department of Parks, Recreation and Tourism Management, as well as graduate and undergraduate students – several  of whom are volunteering their time and effort to work on this important issue.