Long before babies can talk — even before they can sit up on their own — they are mentally forming categories for objects and animals in a way that, for example, sets apart squares from triangles and cats from dogs, psychologists say.

Now, research conducted by the University of Delaware’s Paul Quinn, professor of psychology, and others indicates that babies as young as 3 months are also classifying faces by race and gender, showing a visual preference for the category they see most often in their daily lives, and that by 9 months they have difficulty recognizing the faces of people from less-familiar races.

“At 3 months of age, the Caucasian infants we studied showed a looking-time preference for Caucasian faces, and when we collaborated with researchers in China, we found the same preference among Asian infants for Asian faces,” Quinn said, adding that most infants are exposed predominantly to members of one racial group, generally their own. “Also at 3 months, infants had the ability to tell apart different faces within their own race as well as within other racial groups, but by 9 months, they had lost that ability for races other than their own.

“It seems that, as time goes on during the infancy period, and we experience some categories more frequently than others, we begin to process those categories differentially.” 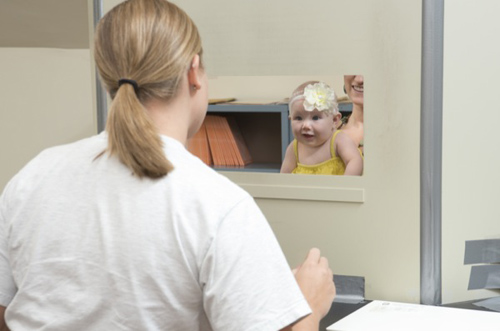 Undergraduate research assistant Paige Valeski prepares to show Mckenna LaRue some photos of familiar and unfamiliar faces to measure how long she spends looking at them. Photos by Kathy F. Atkinson and courtesy Paul Quinn

For more than a decade, Quinn has investigated how infants process social-category information from faces. He collaborates with researchers in Canada, Europe and China through a National Institutes of Health grant that supported the work for an initial five-year period and then was renewed for an additional five years in 2010-11 for $1.84 million. This summer, he was an invited keynote speaker at a conference hosted by North Dakota State University’s Center for Visual and Cognitive Neuroscience, where he discussed his research on the development of facial recognition.

Working with babies presents a fundamental challenge to researchers, Quinn said: “We can’t talk to these infants, of course, so we measure their ‘looking time’ — how long they spend looking at different images we show them.” As objects become more familiar, the baby spends less time looking at them, he said, and when an unfamiliar image appears, looking time increases.

“From this type of research, we believe that infants can look at images of cats and dogs and separate them out into two categories, even when they’re shown images of specific cats or dogs they haven’t seen before,” Quinn said. “That process may provide the initial starting point on the pathway to adult concept formation, where information and memories are stored in our minds in categories, like folders in a file cabinet.”

From observing babies looking at pictures of cats and dogs, Quinn began wondering if infants also grouped human faces according to their characteristics. Quinn and others found that babies had a preference for female faces, and they later discovered that the preference only applied to infants who had female caregivers and spent most of their time with women. When they studied babies with male caregivers, they found the preference reversed.

“So we realized that it’s a familiarity issue, not an inherent preference for females,” Quinn said. “Then, we started wondering about race.” 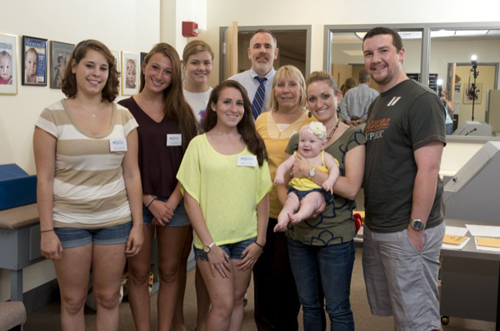 The researchers in various parts of the world showed babies faces representing four ethnic categories — African, Asian, Caucasian and South Asian — and found the change that seemed to occur between the ages of 3 and 9 months. With the younger infants better at recognizing faces from all races, not just their own, than the older ones were, Quinn said he and his colleagues decided to explore whether that development could be changed.

Parents were given picture books showing faces of other races and were asked to read them regularly to their babies starting at age 6 months. After being shown a number of Asian faces in a book, for example, Caucasian 9-month-olds again became able to tell different Asian faces apart, just as they had been able to do when they were younger, Quinn said. Another version of the study showed 8-month-old Caucasian babies daily videos featuring Asian faces, and again, he said, “After two to three weeks of training, we were able to reverse the way their perception [otherwise] narrowed.” 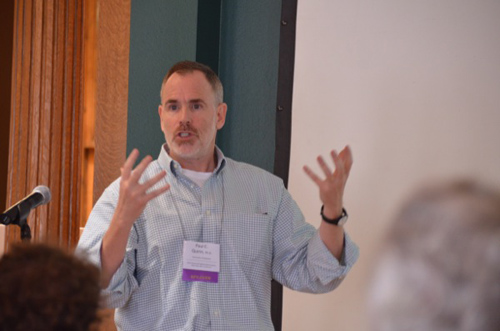 Paul Quinn presents an overview of his research at a conference this summer at the Center for Visual and Cognitive Neuroscience at North Dakota State University. Photos by Kathy F. Atkinson and courtesy Paul Quinn

As the research progresses, more issues are expected to arise and be investigated.