Eyjafjallajökull. While some say it is “unpronounceable”, it would be a good idea to get used to the name because for sure it is going to be around the international media for a long time to come.

Eyjafjallajökull (ei-zha-fiAla-jo-kUtl) is Iceland’s Mountain Glacier. It’s done it before and it wasn’t pretty. It erupted in 920, 1612, 1821-1823 and now in 2010. All of the previous eruptions were precursors to more massive activity from the neighbouring Katla volcano, which this time, according to geologists, could take one to two years to erupt.

And Eyjafjallajökull is the dwarf, Katla the giant.

Or if the wind changes and blows it south-west across Canada and the USA.

Then what happens when Katla blows?

It is a question of going to bed on Wednesday night, waking up on Thursday morning and finding oneself in a different world. 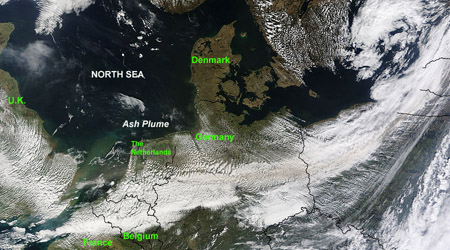 In the first 24 hours after the eruptions on April 13 and 14 (when the crater blew through 200 metres of compacted ice), 29,000 flights from and to Europe were cancelled. Saturday added a further 16,000 (out of 22,000), as the plume rises eleven kilometres in height and contains particles of glass, sand and rock which would tear an aircraft’s engine to shreds.

The impact on an industry already reeling from the collapse of the economic and banking system is some 200 million USD per day. With the situation at Eyjafjallajökull worsening, the situation in the skies cannot be expected to improve.

However, World Health Organization says “so long as ash remains in the upper atmosphere, there will not likely be an increased risk of health effects”.

Dr. Neira adds “If people are outside and notice irritation in their throat and lungs, a runny nose or itchy eyes, they should return indoors and limit their outdoor activities”.

The last time Eyjafjallajökull had an episode was in 1821, pouring tonnes of ash containing toxic fluoride gas into the atmosphere. It lasted not 24 hours, but until 1823, causing the deaths of many cattle and sheep through fluor poisoning. The winds were more clement, dissipating the plume and blowing it in several directions.

When another Icelandic volcano, Laki, blew in 1783-1784, 120 million tonnes of sulphur dioxide was released (three times the European industrial output in 2006), resulting in thousands of deaths across Europe.

While this article is presenting a worst-case scenario, and is not an attempt at scare-mongering, it is a valid point to entertain the notion that you can wake up one morning in a changed world.

Eyjafjallajökull has reared its head. Let us hope that for the first time in the last thousand years, Katla decides not to follow suit.

Source: Pravda (The post is slightly modified from its original version).