By using common materials found pretty much anywhere there is dirt, a team of Michigan State University researchers have developed a new thermoelectric material.

This is important, they said, because the vast majority of heat that is generated from, for example, a car engine, is lost through the tail pipe. It’s the thermoelectric material’s job to take that heat and turn it into something useful, like electricity.

The researchers, led by Donald Morelli, a professor of chemical engineering and materials science, developed the material based on natural minerals known as tetrahedrites.

“What we’ve managed to do is synthesize some compounds that have the same composition as natural minerals,” said Morelli, who also directs MSU’s Center for Revolutionary Materials for Solid State Energy Conversion. “The mineral family that they mimic is one of the most abundant minerals of this type on Earth – tetrahedrites.

“By modifying its composition in a very small way, we produced highly efficient thermoelectric materials.” 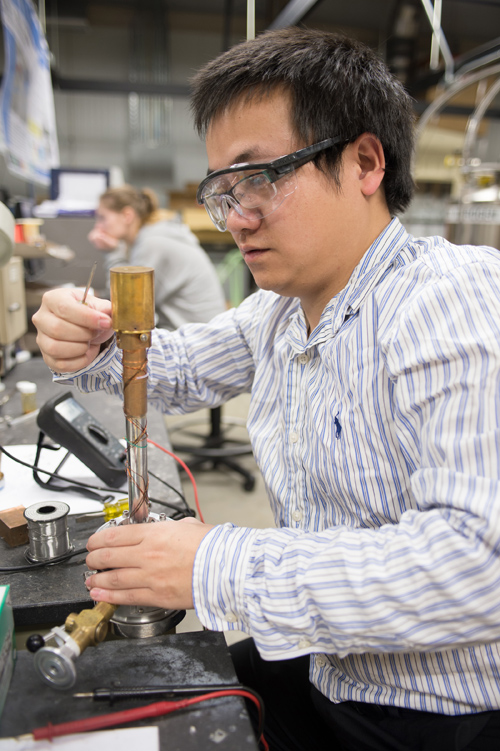 The search to develop new thermoelectric materials has been ongoing. Morelli said that while some new, more efficient materials have been discovered as of late, many of those are not suitable for large-scale applications because they are derived from rare or sometimes toxic elements, or the synthesis procedures are complex and costly.

“Typically you’d mine minerals, purify them into individual elements, and then recombine those elements into new compounds that you anticipate will have good thermoelectric properties,” he said. “But that process costs a lot of money and takes a lot of time. Our method bypasses much of that.”

The MSU researchers’ method involves the use of very common materials, grinding them to a powder, then using pressure and heat to compress into useable sizes.

“It saves tremendously in terms of processing costs,” he said. 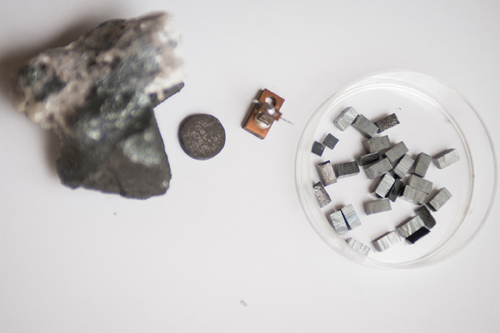 Thermoelectric material is created from common raw materials, heat and pressure. The work is done in the lab of Donald Morelli, professor of chemical engineering and materials science. Photo by G.L. Kohuth.

The researchers expect this discovery could pave the way to many new, low-cost thermoelectric generation opportunities with applications that include waste heat recovery from industrial power plants, conversion of vehicle exhaust gas heat into electricity, and generation of electricity in home-heating furnaces.

The research was published in the online journal Advanced Energy Materials. 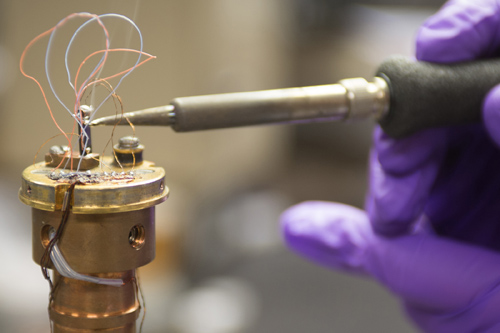 Newly developed thermoelectric material is tested in MSU’s Center for Revolutionary Materials for Solid State Energy Conversion. The material is used to convert waste heat into electricity and other forms of energy. Photo by G.L. Kohuth. 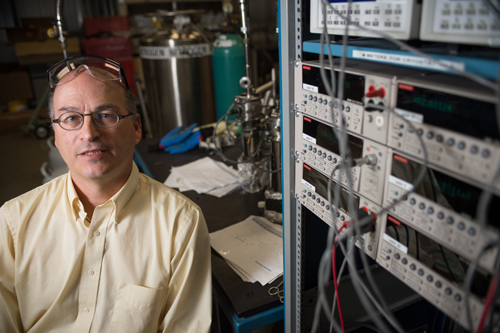 MSU researcher Donald Morelli leads a team that has developed a new thermoelectrical material. The materials are used in cars, computers and other devices to capture waste heat and turn it into useable energy. Photo by G.L. Kohuth.

For more information on the Center for Revolutionary Materials for Solid State Energy Conversion, visit www.egr.msu.edu/efrc/about-us%20.