For the first time, the complete genomes of three populations of aye-ayes–a type of lemur–have been sequenced and analyzed.

The results of the genome-sequence analyses are published this week in the journal Proceedings of the National Academy of Sciences (PNAS).

The research was led by George Perry, an anthropologist and biologist at Penn State University; Webb Miller, a biologist and computer scientist and engineer at Penn State; and Edward Louis of the Henry Doorly Zoo and Aquarium in Omaha, Neb., and Director of the Madagascar Biodiversity Partnership.

The aye-aye–a lemur that is found only on the island of Madagascar in the Indian Ocean–was recently re-classified as “Endangered” by the International Union for the Conservation of Nature. 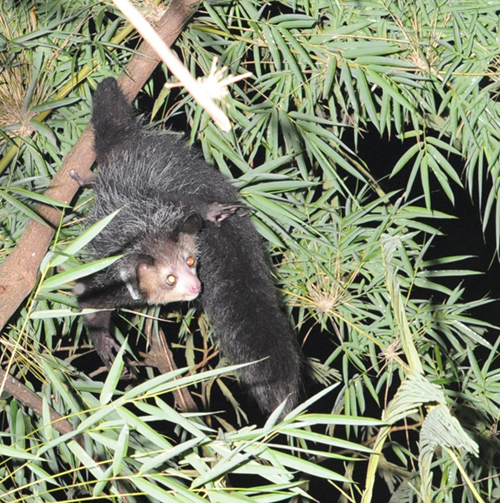 An aye-aye on Madagascar in its forest habitat; Madagascar forests are in decline. Image credit: Edward Louis, Omaha Zoo

“The biodiversity of Madagascar is like nowhere else on Earth, with all 88 described lemur species restricted to the island, but with less than 3 percent of its original forest remaining,” said Simon Malcomber, program director in the National Science Foundation’s (NSF) Division of Environmental Biology, which in part funded the research.

“It’s essential to preserve as much of this unique diversity as possible,” Malcomber said.

Added Perry, “The aye-aye is one of the world’s most unusual and fascinating animals.”

“Aye-ayes use continuously growing incisors to gnaw through the bark of dead trees. They have long, thin, flexible middle fingers to extract insect larvae, filling the ecological niche of a woodpecker.

“Aye-ayes are nocturnal, solitary and have very low population densities, making them difficult to study and sample in the wild.” 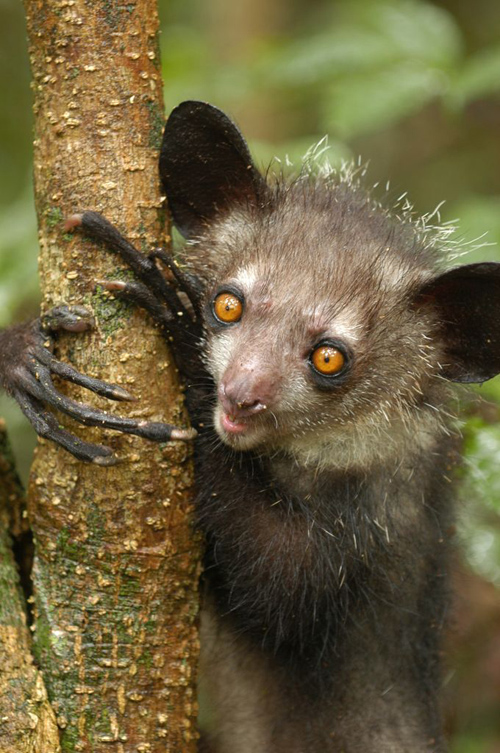 The aye-aye–a type of lemur–extracts insects from trees, filling the niche of a woodpecker. Image credit: Edward Louis, Omaha Zoo

Perry and other scientists are concerned about the long-term viability of aye-ayes as a species, given the loss and fragmentation of forest habitats in Madagascar.

“As forest patches become smaller, there’s a risk that there won’t be sufficient numbers of aye-ayes in an area to maintain a population over multiple generations.

“We were looking to make use of new genomic-sequencing technologies to characterize patterns of genetic diversity among some of the surviving aye-aye populations, with an eye toward the prioritization of conservation efforts.” 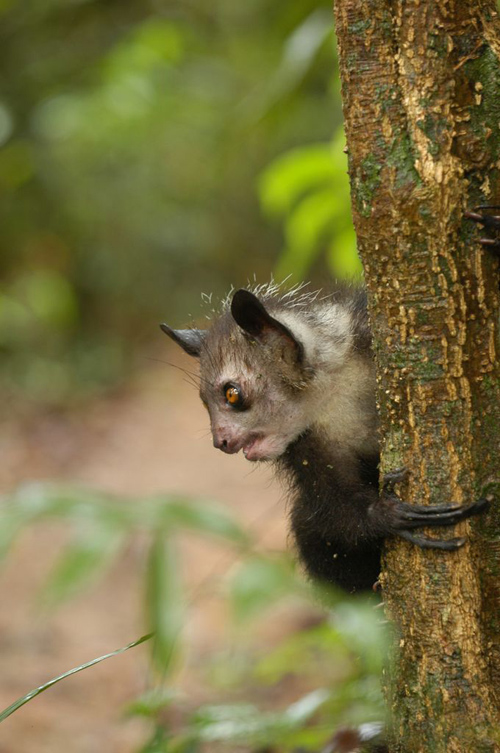 The researchers located aye-ayes and collected DNA samples from the animals in three regions of Madagascar: the northern, eastern and western regions.

To discover the extent of the genetic diversity in present-day aye-ayes, the scientists generated the complete genome sequences of 12 individual aye-ayes.

They then analyzed and compared the genomes of the three populations.

They found that, while Eastern and Western aye-ayes are somewhat genetically distinct, aye-ayes in the northern part of the island and those in the east show a more significant genetic distance, suggesting an extensive period during which interbreeding has not occurred between the populations in these regions.

“This analysis can help us gauge how long the aye-aye populations have been geographically separated and unable to interbreed.” 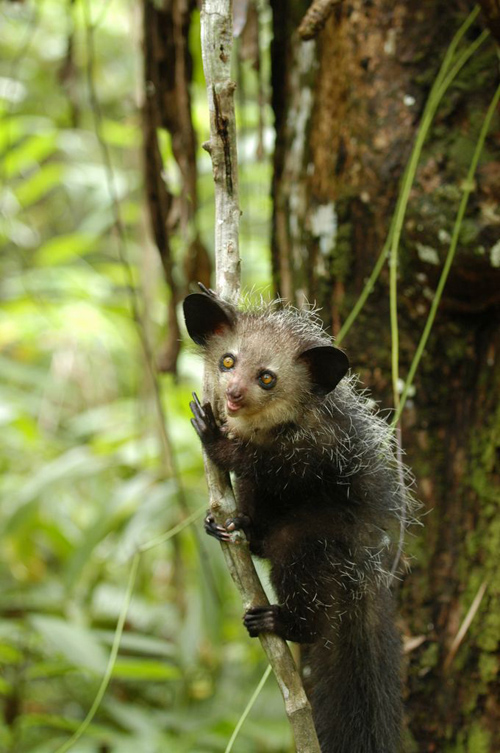 Aye-ayes in northern Madagascar have “genetic distance” from those in the east and west. Image credit: Edward Louis, Omaha Zoo

The researchers found that present-day African and European human populations have a smaller amount of genetic distance than that between northern and eastern aye-aye populations, suggesting that the aye-aye populations were separated for a lengthy period of time by geographic barriers.

“We believe that northern aye-ayes have not been able to interbreed with other populations for some time,” said Miller. “Although they are separated by a distance of only about 160 miles, high plateaus and major rivers may have made intermingling relatively infrequent.”

The results suggest that the separation of the aye-aye populations stretches back longer than 2,300 years, when human settlers first arrived on Madagascar and started burning the aye-ayes’ forest habitat and hunting lemurs.

“This work highlights an important region of aye-aye biodiversity in northern Madagascar, and this unique biodiversity is not preserved anywhere except in the wild,” said Louis.

“There is tremendous historical loss of habitat in northern Madagascar that’s continuing at an unsustainable rate today.”

In future research, the scientists would like to sequence the genomes of other lemur species–more than 70 percent of which are considered endangered or critically endangered–as well as aye-ayes from the southern reaches of Madagascar.

In addition to Perry, Miller and Louis, scientists who contributed to the research include Stephan Schuster, Aakrosh Ratan, Oscar Bedoya-Reina and Richard Burhans of Penn State; Runhua Lei of the Henry Doorly Zoo and Aquarium and Steig Johnson of the University of Calgary in Alberta, Canada.

Funding for aye-aye sample collection was provided by Conservation International, the Primate Action Fund and the Margot Marsh Biodiversity Foundation, along with logistical support from the Ahmanson Foundation and the Theodore F. and Claire M. Hubbard Family Foundation.

Additional support came from the National Institutes of Health, the Pennsylvania Department of Health and the College of the Liberal Arts at Penn State University.