Men May Have Natural Aversion to Adultery with Friends’ Wives, Says MU Researcher

COLUMBIA, Mo. – After outgrowing teenage infatuations with the girl next door, adult males seem to be biologically designed to avoid amorous attractions to the wife next door, according to a University of Missouri study that found adult males’ testosterone levels dropped when they were interacting with the marital partner of a close friend. Understanding the biological mechanisms that keep men from constantly competing for each others’ wives may shed light on how people manage to cooperate on the levels of neighborhoods, cities and even globally.

“Although men have many chances to pursue a friend’s mate, propositions for adultery are relatively rare on a per opportunity basis,” said Mark Flinn, professor of anthropology in the College of Arts and Science. “Men’s testosterone levels generally increase when they are interacting with a potential sexual partner or an enemy’s mate. However, our findings suggest that men’s minds have evolved to foster a situation where the stable pair bonds of friends are respected.”

Flinn says that these findings might help solve global problems. 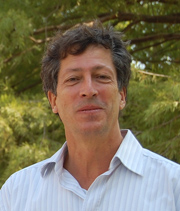 Mark Flinn, professor of anthropology in the MU College of Arts and Science, found that adult males’ testosterone levels dropped when they were interacting with the lover of a close friend. Image credit: University of Missouri

“Ultimately, our findings about testosterone levels illuminate how people have evolved to form alliances,” said Flinn. “Using that biological understanding of human nature, we can look for ways to solve global problems. The same physiological mechanisms that allow villages of families to coexist and cooperate can also allow groups like NATO and the U.N. to coordinate efforts to solve common problems. The more we view the Earth as a single community of people, the greater our ability to solve mutual threats, such as climate change.”

Evolutionarily, men who were constantly betraying their friends’ trust and endangering the stability of families may have caused a survival disadvantage for their entire communities, according to Flinn. A community of men who didn’t trust each other would be brittle and vulnerable to attack and conquest. The costs of an untrustworthy reputation would have outweighed the benefits of having extra offspring with a friend’s conjugal companion.

For example, a cautionary tale of the dangers of adultery can be found in the myth of Camelot. Sir Lancelot betrayed King Arthur by seducing Guinevere. Soon after, the fellowship of the Knights of the Round Table disintegrated and the kingdom fell. The alliance of powerful males could not hold once trust had been lost.

The study “Hormonal Mechanisms for Regulation of Aggression in Human Coalitions” was published in the journal Human Nature. Co-authors were Davide Ponzi of MU’s Division of Biological Sciences in the College of Arts and Science and Michael Muehlenbein of Indiana University.