A team led by researchers from the UCLA Henry Samueli School of Engineering and Applied Science has discovered that microscopic bacteria have a lot in common with earthquakes — when it comes to their jolting movements.

In a new study published in the peer-reviewed Proceedings of the National Academy of Sciences, the scientists also report that a molecular “glue” produced by the bacteria to help them adhere to surfaces also acts as a sort of transportation lubricant, helping them move and organize into rudimentary social structures. These discoveries, they say, could lead to new ways to combat harmful microbes in the long term.

The commonly studied bacteria Myxococcus xanthus is known for complex social organization, with groups of them “hunting” together like packs of wolves. At times, tens of thousands of individual Myxococcus cells can coordinate their movements, organizing into a single entity called a “fruiting body,” which helps ensure their survival. Yet for all this maneuvering, the pace of their movement is painstakingly slow — so slow, in fact, that most scientists rely on time-lapse photography to observe them.

In the current study, the researchers went in the opposite direction. Led by Gerard Wong, a professor of bioengineering and a member of the California NanoSystems Institute at UCLA and the UCLA Center for Biological Physics, the team used high-speed photography to capture the finer movements of Myxococcus and found that individual bacteria move in fits and starts by using tentacle-like appendages known as pili, which act as grappling hooks that pull the bacteria along a surface. 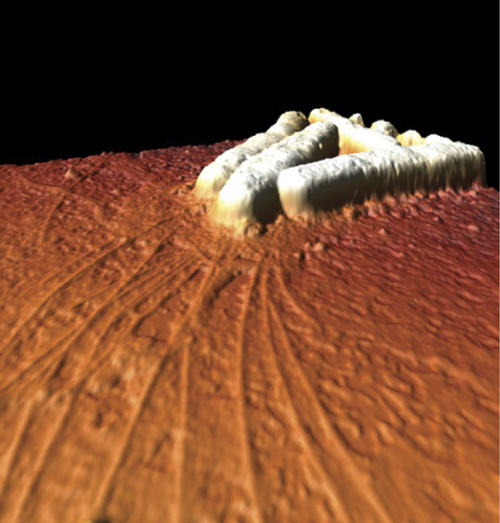 The actual movement of Myxococcus happens only in short bursts between long periods of rest, even when a bacterium’s pili are continuously pulling on it. Both earthquakes and sudden movements by the bacteria follow a mathematical model that describes the frequency and intensity of so-called “avalanche” motions, the researchers said.

“The old joke in the field is that these bacteria move so slowly that the drudgery of studying them is akin to that of watching tectonic plates move,” Wong said. “It turns out to be literally true.”

Other co-authors of the study include postdoctoral scholar Wei Hu and professor Wenyuan Shi, both of UCLA School of Dentistry, and Karin A. Dahmen, an associate professor of physics at the University of Illinois, Urbana–Champaign.

2-in-1 glue and lubricant

An interesting question, the researchers said, is how the earthquake-like movements of the Myxococcus bacteria are related to their social interactions. In forming fruiting bodies, for example, many cells must coordinate their movements at once. So how do they do it?

The researchers found that what was thought to be the bacteria’s “glue” — complex molecules composed of sugars known as an exopolysaccharides, which stick to surfaces — also acts as a lubricant, helping the bacteria to glide along the surface. Often, a single bacterium would act as a locomotive, with a train of additional, attached bacteria trailing along, all gliding over the sugar-based lubricant.

Wong said that a fundamental knowledge of how bacteria move on a surface and form colonies can help researchers come up with new anti-infective therapeutic strategies.

“Myxococcus is probably the most complex bacterium on earth, with extensive social behaviors and unique gliding motility,” said UCLA’s Shi. “The NIH has been funding its study as the best model organism for multicellular development — a link between bacteria and higher organisms. Studying gliding motility has implications for fundamental biology, since this is how organisms move from ocean to land, from an evolutionary point of view.

“Gliding motility enables bacteria to move over solid surfaces and is a key virulent factor that enables pathogenic bacteria to invade in human tissues,” Shi added. “Our discovery opens a new gateway to study this molecular mechanism and to come up with new ways to combat microbial pathogenesis.”

The research was funded by the National Science Foundation, the National Institutes of Health and the Center for the Physics of Living Cells.