How the World’s Saltiest Pond gets its Salt

Jay Dickson and Jim Head have gathered time-lapse photography and other data about the sustained salinity of Antarctica’s Don Juan Pond, the most saline natural body of water on earth. Their findings, published online in Scientific Reports, suggest that such ponds could be possible on Mars.

PROVIDENCE, R.I. [Brown University] — Antarctica’s Don Juan Pond might be the unlikeliest body of water on Earth. Situated in the frigid McMurdo Dry Valleys, only the pond’s high salt content — by far the highest of any body of water on the planet — keeps it from freezing into oblivion.

Now a research team led by Brown University geologists has discovered how Don Juan Pond gets the salty water it needs to exist.

Using time lapse photography and other data, the researchers show that water sucked out of the atmosphere by parched, salty soil is the source of the saltwater brine that keeps the pond from freezing. Combine that with some fresh water flowing in from melting snow, and you’ve got a pond able to remain fluid in one of the coldest and driest places on Earth. And because of the similarities between the Dry Valleys and the frozen desert of Mars, the findings could have important implications for water flow on the Red Planet both in the past and maybe in the present. 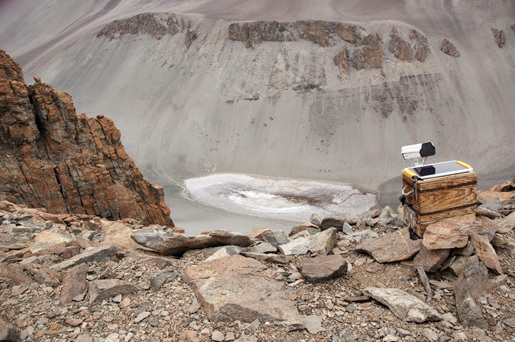 The research represents the most detailed observations ever made of Don Juan Pond. “It was a simple idea,” Dickson said of the team’s approach. “Let’s take 16,000 pictures of this pond over the course of two months and then see which way the water’s flowing. So we took the pictures, correlated them to the other measurements we were taking, and the story told itself.”

What the pictures showed was that water levels in the pond increase in pulses that coincide with daily peaks in temperature, suggesting that the water comes partly from snow warmed just enough by the midday sun to melt. But that influx of fresh water doesn’t explain the pond’s high salt content, which is eight times higher than that of the Dead Sea. For that explanation, the researchers looked to a second source of liquid documented in the photos.

The second source comes from a channel of loose sediment located to the west of the pond. Previous research had found that sediment to be high in calcium chloride salt. To see if that was the source of the pond’s salt, the researchers set up a second time-lapse camera to monitor the channel and synchronized the pictures with data collected from nearby weather stations.

The pictures show dark streaks of moisture called water tracks forming in the soil whenever the relative humidity in the air spiked. Similar water tracks also form on a cliff face north of the pond. What’s forming these tracks is the salt in the soil absorbing any available moisture in the air, a process known as deliquescence. Those water-laden salts then trickle down through the loose soil until they reach the permafrost layer below. There they sit until the occasional flow of snowmelt washes the salts down the channel and into the pond.

When the team saw how closely correlated the appearance of water tracks was to their humidity readings, they knew the tracks were the result of deliquescence and that the process was key to keeping the pond salty enough to persist.

The findings refute the dominant interpretation of Don Juan Pond’s origin. Since the pond’s discovery in 1961, most researchers had agreed that its briney waters must be supplied mainly from deep in the ground. However, these new images show no evidence at all that groundwater contributes to the pond.

Head and Dickson mainly study the geology of bodies other than Earth, so they approach Antarctica as a model for the cold, dry desert of Mars. What they have learned about Don Juan Pond could tell us something about the possibilities for flowing water on Mars, both in the past and in the present.

The images of water tracks at Don Juan Pond look a lot like features recently imaged on Mars called recurring slope lineae, the researchers say. The features appear on Mars as dark streaks that seem to flow downslope on cliff faces. They often recur in the same places at the same times of year, hence their name. Some scientists believe these streaks indicate some kind of flowing brine, the best evidence yet that there might be flowing water on present day Mars.

The research in Antarctica strengthens the view that these lineae on Mars are indeed formed by flowing brine. Frost has been observed on Mars, suggesting that the atmosphere contains at least a little water vapor. There have also been chloride-bearing salts detected on Mars, which would be capable of the same kind deliquescence seen in Antarctica. And importantly, the processes at Don Juan Pond require no groundwater, which is not thought to exist currently on Mars.

“Broadly speaking, all the ingredients are there for a Don Juan Pond-type hydrology on Mars,” Dickson said. It’s not likely that there’s enough water currently on Mars for the water to form ponds, but stronger flows in Mars’s past might have formed plenty of Don Juan Ponds.

“Don Juan Pond is a closed basin pond and we just documented a couple hundred closed basins on Mars,” Head said. “So what we found in Antarctica may be a key to how lakes worked on early Mars and also how moisture may flow on the surface today.”