Washington, D.C. — The composition of the Earth’s core remains a mystery. Scientists know that the liquid outer core consists mainly of iron, but it is believed that small amounts of some other elements are present as well. Oxygen is the most abundant element in the planet, so it is not unreasonable to expect oxygen might be one of the dominant “light elements” in the core. However, new research from a team including Carnegie’s Yingwei Fei shows that oxygen does not have a major presence in the outer core. This has major implications for our understanding of the period when the Earth formed through the accretion of dust and clumps of matter. Their work is published Nov. 24 in Nature. 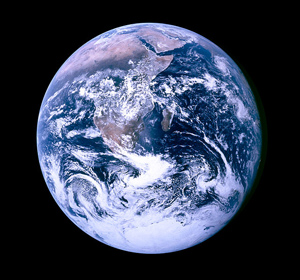 "The Blue Marble" is a famous photograph of the Earth taken on December 7, 1972 by the crew of the Apollo 17 spacecraft en route to the Moon at a distance of about 29,000 kilometers (18,000 statute miles). It shows Africa, Antarctica, and the Arabian Peninsula. Image credit: NASA. Image source: Wikipedia

According to current models, in addition to large amounts of iron, the Earth’s liquid outer core contains small amounts of so-called light elements, possibly sulfur, oxygen, silicon, carbon, or hydrogen. In this research, Fei, from Carnegie’s Geophysical Laboratory, worked with Chinese colleagues, including lead author Haijun Huang from China’s Wuhan University of Technology, now a visiting scientist at Carnegie. The team provides new experimental data that narrow down the identity of the light elements present in Earth’s outer core.

With increasing depth inside the Earth, the pressure and heat also increase. As a result, materials act differently than they do on the surface. At Earth’s center are a liquid outer core and a solid inner core. The light elements are thought to play an important role in driving the convection of the liquid outer core, which generates the Earth’s magnetic field.

Scientists know the variations in density and speed of sound as a function of depth in the core from seismic observations, but to date it has been difficult to measure these properties in proposed iron alloys at core pressures and temperatures in the laboratory.

“We can’t sample the core directly, so we have to learn about it through improved laboratory experiments combined with modeling and seismic data,” Fei said.

High-speed impacts can generate shock waves that raise the temperature and pressure of materials simultaneously, leading to melting of materials at pressures corresponding to those in the outer core. The team carried out shock-wave experiments on core materials, mixtures of iron, sulfur, and oxygen. They shocked these materials to the liquid state and measured their density and speed of sound traveling through them under conditions directly comparable to those of the liquid outer core.

By comparing their data with observations, they conclude that oxygen cannot be a major light element component of the Earth’s outer core, because experiments on oxygen-rich materials do not align with geophysical observations. This supports recent models of core differentiation in early Earth under more ‘reduced’ (less oxidized) environments, leading to a core that is poor in oxygen.

“The research revealed a powerful way to decipher the identity of the light elements in the core. Further research should focus on the potential presence of elements such as silicon in the outer core,” Fei said.