Duterte, a new ‘Rebellion’ on the Horizon?

Russias coming back, Chinas emerging military power, North Koreas successful nuke and missile tests, Irans clear establishment as regional power, – US has enough, more than enough (headache). And now Duterte, Philippines new President, who called Obama ‘son of a bitch’ just before the beginning of the ASEAN Summit early September, a new ‘mind’ (may be a power) in the row.

Duterte is unwilling to answer his country’s internal affairs to any foreigh power but to his own people. He is definitely following a bold strategy to ‘liberate’ his country from any US or Western dominance. Let’s look at his other comments:

– More recently he asked the US Special Operation forces to leave Mindanao.

– That’s not all, in August he threatened to pull out of the UN and called the organisation ‘son of a bitch’ for UN’s criticism of his war on drug traffickers.

Is he a new ‘Rebellion’ rising on the East? Seems like so. The little ‘brown brother’wants complete sovereignty. That’s clear. 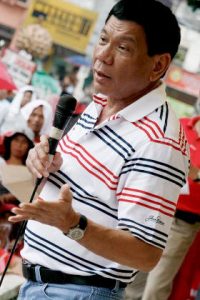 Duterte may be a ‘reflection’ of many in Asia and elsewhere, who lost respect and faith in America’s role as world leader, that sadly includes among others US’s many-faceted diplomacy and military operations in Middle East. And if you look back, at least the last two decades, US never played a ‘positive role’ to bring peace or stability in any of the troubled regions, rather fueled the tensions. After the Iraq invasion in 2003, it got even worse. Philippines President Rodrigo Duterte might be worried for the same reason. One thing he seems sure, with the US help, problems in his country’s south will only aggravate. In the name to fight terrorism, US often had unexplained and questionable activities in the troubled parts around the globe.

If the 71 years old Philippino politician continuous flaring, he will be then the next new voice against US after the Ex-Venezuelan strongman Hugo Chavez.