Doubling down on Schrödinger’s cat

Yale physicists have given Schrödinger’s famous cat a second box to play in, and the result may help further the quest for reliable quantum computing.

Schrödinger’s cat is a well-known paradox that applies the concept of superposition in quantum physics to objects encountered in everyday life. The idea is that a cat is placed in a sealed box with a radioactive source and a poison that will be triggered if an atom of the radioactive substance decays. Quantum physics suggests that the cat is both alive and dead (a superposition of states), until someone opens the box and, in doing so, changes the quantum state. 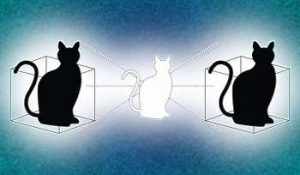 This hypothetical experiment, envisioned by one of the founding fathers of quantum mechanics in 1935, has found vivid analogies in laboratories in recent years. Scientists can now place a wave-packet of light composed of hundreds of particles simultaneously in two distinctly different states. Each state corresponds to an ordinary (classical) form of light abundant in nature.

A team of Yale scientists created a more exotic type of Schrödinger’s cat-like state that has been proposed for experiments for more than 20 years. This cat lives or dies in two boxes at once, which is a marriage of the idea of Schrödinger’s cat and another central concept of quantum physics: entanglement. Entanglement allows a local observation to change the state of a distant object instantaneously. Einstein once called it “spooky action at a distance,” and in this case it allows a cat state to be distributed in different spatial modes.

The Yale team built a device consisting of two, 3D microwave cavities and an additional monitoring port — all connected by a superconducting, artificial atom. The “cat” is made of confined microwave light in both cavities.

“This cat is big and smart. It doesn’t stay in one box because the quantum state is shared between the two cavities and cannot be described separately,” said Chen Wang, a postdoctoral associate at Yale and first author of a study in the journal Science, describing the research. “One can also take an alternative view, where we have two small and simple Schrodinger’s cats, one in each box, that are entangled.”

The research also has potential applications in quantum computation. A quantum computer would be able to solve certain problems much faster than classical computers by exploiting superposition and entanglement. Yet one of the main problems in developing a reliable quantum computer is how to correct for errors without disturbing the information.

“It turns out ‘cat’ states are a very effective approach to storing quantum information redundantly, for implementation of quantum error correction. Generating a cat in two boxes is the first step towards logical operation between two quantum bits in an error-correctible manner,” said co-author Robert Schoelkopf, Sterling Professor of Applied Physics and Physics, and director of the Yale Quantum Institute.

Schoelkopf and his frequent collaborators, Michel Devoret and Steve Girvin, have pioneered the field of circuit quantum electrodynamics (cQED), providing one of the most widely used frameworks for quantum computation research. Devoret, Yale’s F.W. Beinecke Professor of Physics, and Girvin, Yale’s Eugene Higgins Professor of Physics and Applied Physics, are co-authors of the paper.

The research builds upon more than a decade of development in cQED architecture. The Yale team designed a variety of new features, including cylindrical 3D cavities with record quantum information storage time of more than 1 millisecond in superconducting circuits, and a measurement system that monitors certain aspects of a quantum state in a precise, non-destructive way. “We have combined quite a lot of recent technologies here,” Wang said.

The U.S. Army Research Office and the Multidisciplinary University Research Initiatives program of the Air Force Office of Scientific Research supported the research.