In a study using tadpoles, neuroscientists tracked how the brain develops its sense of whether two sensory inputs — for example, vision and touch — happened at the same time.

PROVIDENCE, R.I. [Brown University] — Most people encounter most things by sensing them in multiple ways. As we hear the words people speak, we also see their lips move. We smell, see and hear the onions as we chop them — and we feel them with teary eyes. 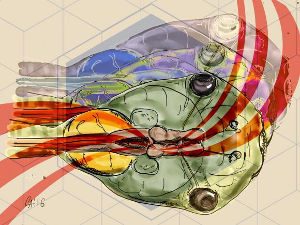 A new study in the model organism of tadpoles reveals how the brain develops the ability to sense when different sensory inputs are simultaneous rather than close in time. Image courtesy Carlos Aizenman

It turns out that the ability to judge such sensory inputs as simultaneous, and therefore likely pertaining to the same thing, is something animal brains must develop through experience. A new study using tadpoles as a model organism shows how that appears to happen.

In making their findings, the scientists hope they can better understand how this sensory integration may sometimes go askew, perhaps contributing to disorders including autism. Some studies have suggested that difficulty merging sound and vision in some autism disorders may lead to language deficits.

“People have tried to distill how the brain detects this temporal coincidence,” said study corresponding author Carlos Aizenman, a professor of neuroscience at Brown University. “We created a preparation where we could study how the different inputs are combined in a single cell and what types of brain circuits are involved.”

In the study online in the journal eLife, Aizenman, lead author Daniel Felch and Bard College colleague Arseny Khakhalin were able to electrically stimulate the senses of vision and vibration in the brains of tadpoles at key stages of their neural development. They did so with very precise timing (small fractions of a second apart) and then tracked the responses of neurons in the optic tectum of the tadpole brains, where sensory information is processed and integrated. In humans and other mammals, the same part of the brain is called the superior colliculus, and neurons there do the same job.

The scientists found that sensory integration neurons in the optic tectum in relatively immature tadpole brains would become and remain excited by receiving two stimuli even if they were somewhat far apart in time. As the tadpole brains matured into later stages of development the same neural circuits would squelch their initial excitement if the sensory inputs came similarly far apart. More mature brains became better at determining when stimuli were nearly simultaneous and suppressing excitement when they weren’t.

The results suggest that as tadpole brains mature, inhibitory neurons gain more sway in their balance with excitatory neurons, leading to more refined discrimination between sensory inputs that are truly simultaneous rather than merely proximate in time. In one experiment of the study, the scientists blocked inhibition. That stunted the tadpole brains’ ability to discriminate.

The study illustrates, as others have as well, how sensory experiences shape the developing brain, Aizenman said.

“The brain normally starts out poorly wired,” he said. “Activity in the brain sculpts the response of the brain to have a much more refined and fine-tuned function.”

What’s new is that the research also explains the mechanism by which that happens and shows that it can be derailed.

“The balance of excitation and inhibition in the brain is important for creating this type of temporal window,” Aizenman said. “If you disrupt it, you get abnormal multisensory processing.”

In future work, Aizenman said he hopes to do more of that: experiment with different ways of perturbing the process at different times during development to see what effect that may have on tadpole behaviors such as finding food or avoiding danger.

Tadpoles do not experience language, of course, but the results may still contribute, at a basic level, to generating hypotheses about how sensory integration may be affected in human development. Even though they develop somewhat differently and encounter different experiences, tadpoles and people share the same basic brain organization.