Drugs introduced more than a decade ago that target mutations in a protein known as the epidermal growth factor receptor (EGFR) held the promise of personalized treatments for a common form of non-small cell lung cancer. But most patients quickly develop resistance to these drugs and are left with few or no treatment options, because it has been very difficult to design new drugs that act selectively upon the drug-resistant form.

Now Yale University researchers have discovered a key structural difference in the drug-resistant form of EGFR that could be a new “Achilles heel” for treatment strategies to combat the disease.  Two experimental drugs, AZD9291 and Rociletinib (CO-1686), that show promise against drug-resistant EGFR in recent clinical trials alter the structure of the drug-resistant form so that it appears more like the non-resistant form, the researchers also found. The discoveries were reported by Alanna Schepartz, the Milton Harris ’29 Ph.D. Professor of Chemistry and professor of molecular, cellular, and developmental biology and senior author of the paper appearing May 14 in the Journal of the American Chemical Society. 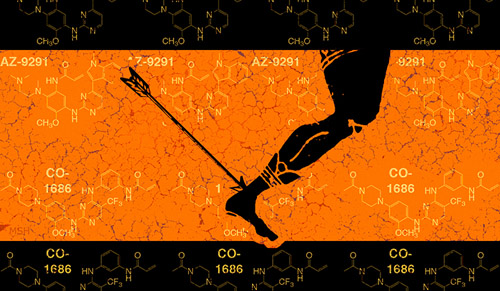 The findings suggest that the cancer-causing activity of drug resistant EGFR may depend on regions and functions of the protein that have been largely ignored by previous drug discovery efforts.

“One very important next goal is to test this implication and evaluate whether the structural change we identified can be exploited as a biomarker” said Schepartz, a member of the Yale Cancer Center’s Developmental Therapeutics program. “Our hope is to provide chemical insights that could guide the development of even newer mutant-selective inhibitors.”

The NIH provided funding for the research. Melissa A. Lowder and Amy E. Doerner are co-authors of the study.