In a new study, Brown University neuroscientists looked cell-by-cell at the brain circuitry that tadpoles, and possibly other animals, use to avoid collisions. The study produced a model of how individual inhibitory and excitatory neurons can work together to control a simple behavior.

PROVIDENCE, R.I. [Brown University] — A neuroscience study provides new insight into the primal brain circuits involved in collision avoidance, and perhaps a more general model of how neurons can participate in networks to process information and act on it.

In the study, Brown University neuroscientists tracked the cell-by-cell progress of neural signals from the eyes through the brains of tadpoles as they saw and reacted to stimuli including an apparently approaching black circle. In so doing, the researchers were able to gain a novel understanding of how individual cells contribute in a broader network that distinguishes impending collisions.

The basic circuitry involved is present in a wide variety of animals, including people, which is no surprise given how fundamental collision avoidance is across animal behavior.

“Imagine yourself walking in a forest while keeping a conversation with your friend,” said Arseny Khakhalin, neuroscience postdoctoral scholar at Brown and lead author of the study in the European Journal of Neuroscience. “You can totally keep the conversation going, and at the same time avoid tree trunks and shrubs without even thinking about them consciously. That’s because you have a whole region in your brain that is dedicated, among other things, to this task.” 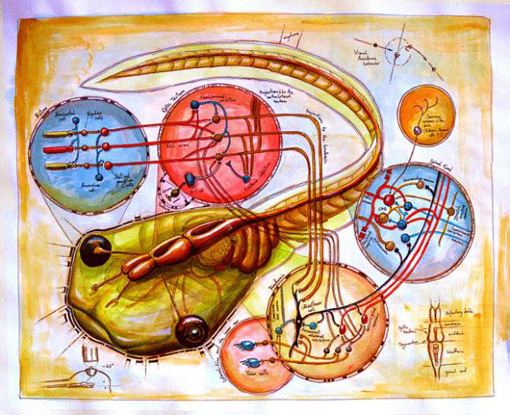 Evasive tadpoles help probe brain circuitry. Researchers found that tadpoles use the optic tectum region of their brain to determine that something is approaching and avoid collision. The finding helps scientists better understand how different neurons work together to control simple behavior in many animals. Illustration by Arseny Khakhalin

To learn how collision avoidance works, Khakhalin studied the task using tadpoles as a model organism, because as senior author and neuroscience professor Carlos Aizenman put it, they are “sufficiently complex to produce interesting behavior, but have nervous systems sufficiently simple to address in an integrated experimental approach.”

They started with the avoidance behavior. With tadpoles in a dish atop a screen, they projected digital black dots, representing virtual objects, of varying widths, at varying speeds and angles of approach. They also just flashed dots in place. The tadpoles would flee approaching dots as long as they reached a certain threshold angular size, but rarely reacted to the dots that merely blinked onto the scene but weren’t moving toward them. The response confirmed that tadpoles can distinguish approaching rather than merely proximate visual stimuli.

The researchers then sought to determine how the tadpoles process different stimuli. To do that they held the tadpoles in place while presenting a variety of simple animations via a fiber optic cable held next to an eye. The animations included a flashed circle, an apparently approaching circle (it became larger and larger), and a couple of “in between” animations, such as a circle that was faded in, rather than simply flashed into being.

While the tadpoles watched the animations, the researchers tracked their tail movements with a high-speed camera (to determine if the tadpoles were executing a fleeing maneuver) and recorded electrical signals along the visual processing circuitry: at the optic nerve leading from the retina to the brain’s optic tectum region, at “excitatory” and “inhibitory” synaptic inputs of neurons in the optic tectum, and at the outputs of the tectal neurons.

What the scientists found was that the tectum, rather than the retina, appears to be where the tadpoles determine that something is approaching rather than merely present. How did they know? The strongest difference between responses to the apparently approaching circle, versus responses to other stimuli, such as flashed or faded circles, was detected at the stage of output from tectal neurons.

Moreover, the difference in activity related to approaching vs. flashed circles increased as the signal propagated from the optic nerve, through tectum input, and to tectum output.

“The tectum is the first place that responded to approaching stimuli not just differently, but stronger,” Khakhalin said.

An implication of the experiments was that when individual neurons in the tectum are uniquely activated by an apparently approaching stimulus, they collectively generate a signal to send to downstream parts of the brain that can get the tail moving to avoid the collision.

That’s indeed what excitatory neurons do, but the researchers wanted to know what role the inhibitory neurons were playing, especially because the balance of inhibitory and excitatory activity in the tectum varied with different stimuli.

To find out, they chemically blocked inhibitory neurons in the tectum in some tadpoles, chemically enhanced their activity in others and left still other tadpoles unaltered as controls. They found that when they altered the degree of inhibition in either direction, the output selectivity for an oncoming stimulus was lost. When inhibition was blocked, the individual excitatory cells lost their selectivity, too. When inhibition was enhanced, the individual excitatory cells retained their selectivity but could not project a signal collectively.

Khakhalin said the evidence seems to support the idea of inhibitory cells as facilitators of network function. They were not necessarily responsible for making the tectum selective. Instead, their ability to moderate excitation allowed the network of cells to function so that an organized signal from the individual excitatory neurons could emerge from the tectum.

The team was able to use these findings to create a conceptual model of the collision stimulus circuitry.

Khakhalin’s hypothesis of how it works is that inhibitory/excitatory balance allows the tectum to build up a necessary degree of excitement about the stimulus of interest (e.g. something has been getting bigger) while still allowing enough “calm” to consider the next moment wave of input (it just got bigger again).

Aizenman said the paper illustrates broader approach that his lab is applying to fundamental neuroscience questions.

“It is part of a greater project to be able to take an entire behavior and break it down into all of its neuronal components, to build a model in which we can understand how activity in single neurons and in the connections between them can all synergize to produce a behavior,” he said.

In addition to Khakhalin and Aizenman, other authors are former Brown undergraduates David Koren and Jenny Gu, and physics graduate student Heng Xu.

The National Science Foundation, the National Eye Institute and the Fox Foundation Fellowship for the Visual Sciences supported the research.