COLUMBIA, Mo. – During the 2011 and 2012 migration seasons, University of Missouri researchers monitored mallard ducks with new remote satellite tracking technology, marking the first time ducks have been tracked closely during the entirety of their migration from Canada to the American Midwest and back.  The research revealed that mallards use public and private wetland conservation areas extensively as they travel hundreds of miles across the continent. Dylan Kesler, an assistant professor of fisheries and wildlife in the College of Agriculture, Food and Natural Resources at MU, says these findings illustrate the importance of maintaining protected wetland areas.

Lisa Webb, an assistant professor of wildlife in CAFNR and a research ecologist with the U.S. Geological Survey Cooperative Research Unit, found that mallards use public and private wetland conservation areas extensively as they travel hundreds of miles across the continent. Image credit: University of Missouri

“We have lost nearly 90 percent of wetland areas in Missouri in the last century and 50 percent of wetlands across the country since the early 1800s,” Kesler said. “This loss has affected migratory bird populations and migration timing and routes. Our research shows the importance of these wetland areas to maintain healthy populations of migratory birds and other species, especially in an age of budget cuts for government programs protecting these few remaining wetland areas. If we don’t maintain these wildlife preserves it will put dozens, if not hundreds, of wildlife species in danger.”

For the project, the MU researchers attached small solar-powered tracking devices to the ducks, which transmitted their locations every four hours. Using the new technology, researchers monitored the ducks’ progress in real time. 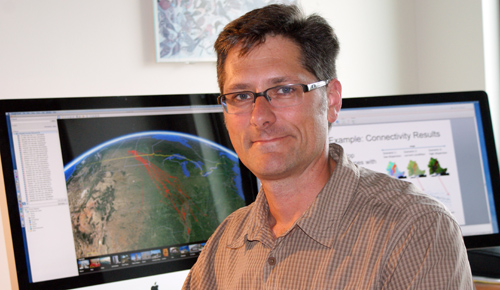 Dylan Kesler, an assistant professor of fisheries and wildlife in the College of Agriculture, Food and Natural Resources at MU, found that mallards use public and private wetland conservation areas extensively as they travel hundreds of miles across the continent. Image credit: University of Missouri

“The tracking devices allowed us to evaluate the ducks’ behavior and biology on an exceptionally detailed scale throughout their annual migration cycle,” Kesler said. “Previously, we only knew when the birds left and when they arrived and some other small things. Now, we have an extensive data set from which to understand the role of different habitats and other factors in migratory populations. We can begin to understand migration in a way that it has never been understood before.”

Lisa Webb, an assistant professor of wildlife in CAFNR and a research ecologist with the U.S. Geological Survey Cooperative Research Unit, says the information gathered will be useful to conservationists looking for ways to ensure healthy duck populations. 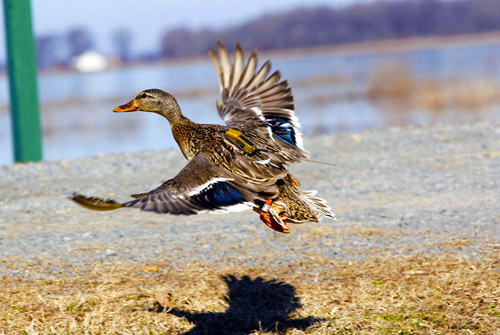 A mallard duck flies off with a tracking device attached to its back. Image credit: Mike Wintroath, Arkansas Game and Fish Commission.

“Our research shows private lands enrolled in the U.S. Department of Agriculture’s Wetland Reserve Program (WRP) have become a critical component of ducks’ migration,” Webb said. “The WRP provides landowners with technical and financial support for restoring and maintaining wetland areas that have conservation benefits. Also, this information is important because it shows how decisions and habitat preferences exist throughout the birds’ annual life cycles and can help waterfowl biologists better manage for the habitat needs of birds.”

Sanctuaries on public areas such as the National Wildlife Refuge System, the largest protected area network in North America with more than 150 million acres of land stretching from Alaska to the Caribbean, also are used frequently by migratory ducks. 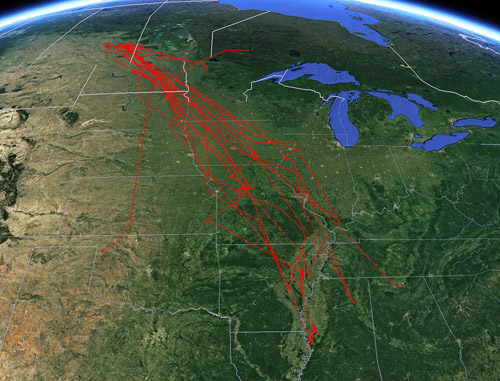 This research has now created baseline information for future research into what influences duck migration flight paths, landing site selection and foraging behavior. Kesler also says that scientists now know more about the pre-migratory feeding habits of the ducks. A duck’s ability to gain weight before its long flight is an important factor that determines if the duck will make it to the northern breeding grounds and southern wintering stations.

“In addition to their pre-migration habits, our data also revealed that during the non-breeding season, ducks forage food for up to 20 miles away from their roosting areas,” Kesler said. “This discovery shows how conservation areas being used by migrating ducks can be improved.”

The research was a collaboration among the MU College of Agriculture, Food and Natural Resources, the U.S. Geological Survey, Missouri Department of Conservation, the Arkansas Fish and Game Commission, Ducks Unlimited and Ducks Unlimited Canada. The team plans on conducting future research to further determine behavior of migratory ducks. The results were published in Biological Conservation.