The deep biosphere—the realm of sediments far below the seafloor—harbors a vast ecosystem of bacteria, archaea, and fungi that are actively metabolizing, proliferating, and moving, according a new study by scientists at Woods Hole Oceanographic Institution (WHOI) and the University of Delaware (UD).

“This is the first molecular evidence for active cell division in the deep biosphere,” says WHOI postdoctoral investigator Bill Orsi, who was the lead author on the study. Previous studies and models had suggested cells were alive, but whether the cells were actually dividing or not had remained elusive.

The finding of so much activity in the deep biosphere has implications for our understanding of global biogeochemical cycles, say the study’s authors.

“Cells are very abundant there, but they do not have high activity levels,” says WHOI microbial ecologist Virginia Edgcomb. “But it’s a huge biosphere, and when you do the math, you see we’re talking about a potentially significant contribution. Carbon is being turned over, and that has important implications for models of carbon and nitrogen cycling.”

A cell’s DNA carries the instructions, or genes, to make the proteins that are needed to build cell structures and to perform necessary functions. To make a protein, the instructions in the DNA are transcribed, or copied, to a molecule of messenger RNA (mRNA). Other molecules in the cell then help translate those instructions to assemble the protein by stringing together more than 20 different kinds of amino acids in a specific sequence. Messenger RNA provides vital clues about the processes a cell uses to survive, because it shows which genes are being used at a given time. (Illustration by Katherine Joyce, Woods Hole Oceanographic Institution)

The researchers analyzed messenger RNA (mRNA) from different depths in a sediment core collected off the coast of Peru in 2002 during Leg 201 of the Ocean Drilling Program. Their work was published in Nature on June 12.

This first glimpse into the workings of the heretofore hidden ecosystem was made possible by the first successful extraction of total mRNA, or the “metatranscriptome,” from the deep biosphere.

Messenger RNA is highly sought-after by microbial ecologists because its presence indicates that the cells that made it are alive, and because it carries the instructions for the proteins the cells are making. That gives researchers valuable information about the biochemical mechanisms and processes the organisms are using to function.

But because the metabolic rates in the deep biosphere are very low, and because mRNA is present in such small amounts—only 4 to 10 percent of the total RNA in most environmental samples —that extracting enough of it to analyze from deep sediments has been thought by many scientists to be impossible, says Edgcomb.

“It’s not easy,” says Orsi, who developed the extraction technique while a postdoctoral investigator in Edgcomb’s lab at WHOI. “There’s a certain amount of banging your head against the wall before it works.” 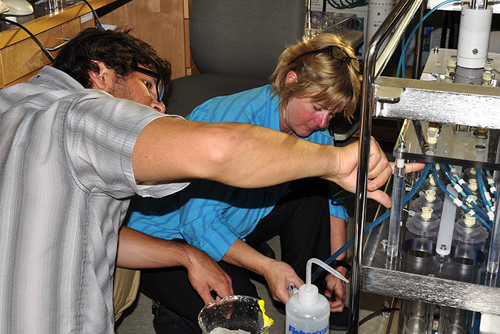 Among the proteins they found coded for in the mRNA, many are involved in cell division, indicating that the cells that made them belong to growing, multiplying populations.

The group found mRNAs related to cell division at all depths tested, from 5 to 159 meters below the seafloor. Such messages were most abundant in zones where cell numbers were the highest, says Orsi, which indicates that the larger cell populations there were likely due to dividing cells.

The study also identified mRNAs for specific biochemical pathways that reveal much about the workings of the deep biosphere ecosystem and its significance to global cycles. The mRNAs came from bacteria and archaea, which have long been recognized as major players in the subseafloor ecosystem; and from fungi, which have recently been suggested to have an important ecological role there.

“It’s been theorized that much of the energy that microbes get in this environment comes from sulfate reduction,” says Orsi. “Basically, instead of breathing with oxygen, they ‘breathe’ with sulfate.”

Until now, models of microbial activity in deep sediments have included sulfate reduction but have not included significant use of nitrate. The current research found comparable numbers of mRNAs involved in nitrate reduction and sulfate reduction, suggesting that both processes are important in the deep biosphere community.

The researchers also found evidence that cells in the deep biosphere are eating amino acids, which are a rich source of carbon and nitrogen and can only come from other living (or recently-deceased) organisms.

“To be a reliable food source for these cells, previous studies have indicated that there probably have to be a lot of dying and/or dead cells to provide the amino acids,” says Orsi. He and his colleagues think those dead or dying cells are native to the deep biosphere rather than remnants that drifted down through the water, because most of the dead material that reaches the seafloor from above is rapidly eaten. Deeper than a few centimeters down, most of the amino acids come from cells that lived and died there.

The experiment turned up another surprise: Many of the cells in the deep biosphere are making proteins to make flagella, the whip-like “tails” that propel them through a fluid environment. The researchers were even able to show that cells making flagellar proteins occurred in areas of the sediment where the pore spaces are large enough to permit flagella-driven locomotion. Other cells produced mRNAs related to gliding and twitching. In sum, the work provided strong evidence that cells in deep sediments are capable of a variety of kinds of movement.

“The take-home story there is, if there’s room to move, they move,” says Orsi.

The current project grew out of earlier studies in 2005 and 2008 by UD microbiologist Jennifer Biddle showing that DNA from fungi occurs in deep sediments from various sites, including the one the current samples came from.

After further work by Biddle, Edgcomb, and other colleagues in 2010 suggested the presence of active populations of living fungi in the sediments, Orsi and Edgcomb obtained funding from the Center for Dark Energy Biosphere Investigations, an NSF-funded Science and Technology Center, to further pursue the activity of fungi in the deep biosphere.

Orsi says obtaining the mRNA was just one of the technical challenges in the complex study. His extraction yielded more than one billion readable mRNA sequences.

“We had a huge matrix of information—a billion sequences and millions of bits of information associated with those,” he says. “How do you parse out what’s important and find correlations?”

Orsi worked with Glenn Christman, a bioinformatics programmer at UD, to integrate several bioinformatics tools to address specific ecological questions.  Their approach allowed for efficient and high-throughput data analysis that facilitated examination of the immense amount of data.