One in 10 species could face extinction by the year 2100 if current climate change impacts continue.

This is the result of University of Exeter research, examining studies on the effects of recent climate change on plant and animal species and comparing this with predictions of future declines.

Published in leading journal Proceedings of the National Academy of Sciences, the study uses the well-established IUCN Red List for linking population declines to extinction risk. The research examines nearly 200 predictions of the future effects of climate change from studies conducted around the world, as well as 130 reports of changes which have already occurred.

The research shows that on average the declines that have already happened match predictions in terms of the relative risk to different species across the world. 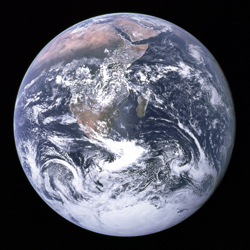 The study covered a wide range of species in all types of habitat across the globe. Image credit: NASA

Many studies have predicted that future climate change will threaten a range of plants and animals with extinction. Some of these studies have been treated with caution because of uncertainty about how species will respond to climate change. But widely published research showing how animals and plants are already responding to climate change gave the Exeter team the opportunity to check whether the predictions were wide of the mark. By producing the largest review ever of such studies, they show that predictions have, on average, been accurate, or even slightly too cautious.

Lead author Dr Ilya Maclean of the University of Exeter’s College of Life and Environmental Sciences (Cornwall Campus) said: “Our study is a wake-up call for action. The many species that are already declining could become extinct if things continue as they are. It is time to stop using the uncertainties as an excuse for not acting. Our research shows that the harmful effects of climate change are already happening and, if anything, exceed predictions.”

The study covered a wide range of species in all types of habitat across the globe. The findings confirm that human-induced climate change is now a threat to global biodiversity.

Co-author Dr Robert Wilson, also of the University of Exeter, said: “By looking at such a range of studies from around the world, we found that the impacts of climate change can be felt everywhere, and among all groups of animals and plants. From birds to worms to marine mammals, from high mountain ranges to jungles and to the oceans, scientists seem to have been right that climate change is a real threat to species.

“We need to act now to prevent threatened species from becoming extinct. This means cutting carbon emissions and protecting species from the other threats they face, such as habitat loss and pollution.”