With research and development assistance from the Georgia Tech Research Institute (GTRI) and seed funding from the Georgia Research Alliance (GRA), an Atlanta-based company is developing what it hopes will be the next-generation instrument for optimizing eyesight for the hundreds of millions of people who wear glasses or contacts – or who are candidates for corrective surgery.

To be used by optometrists and ophthalmologists, the instrument – known as the VisionOptimizer – is intended to provide more accurate vision measurements, along with a more patient-friendly and engaging vision test.  The company believes its system will facilitate the custom-manufacturing of spectacles and contact lenses that provide better eyesight and improved wearing comfort compared to conventional prescriptions.

“We’ve known for a long time that many prescriptions produced by existing methods really didn’t optimize the patient’s vision, but until now we haven’t had a way to make more accurate measurements or to use that information to produce better lenses,” said Keith Thompson, a surgeon and ophthalmologist who is also the CEO of DigitalVision LLC, the company developing the VisionOptimizer.  “Today’s patients need razor-sharp vision to use their smart phones, spend hours at their computers and enjoy sports on the weekends.” 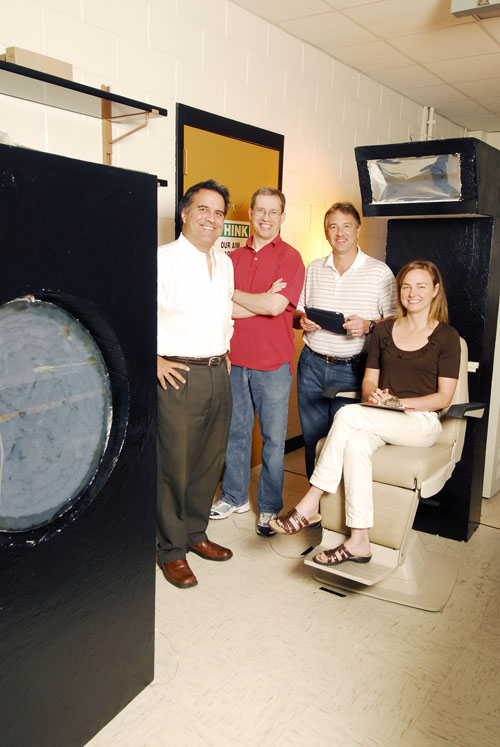 Eye doctors currently prescribe glasses and contact lenses using measurements obtained with the phoropter, an instrument that has changed little since it was introduced in the early 1900s.  During a conventional vision test, the patient looks through the phoropter at an eye chart while the doctor dials different corrective lenses into position.  The patient is asked to choose which set of lenses provides the clearest view of letters on the eye chart.

Phoropter measurements are limited to increments of a quarter of a diopter of resolution. The resulting glasses or contact lenses often fail to provide all of the vision improvement now possible with modern computer-controlled lens fabrication technology, Thompson noted.  And errors cause as many as one in seven prescriptions to be re-made.

During the 1970s, a system called the Humphrey Vision Analyzer was introduced to measure vision more accurately than the phoropter, and to provide a better patient experience.  Instead of viewing an eye chart through a bulky lens dial, the system projected images onto a mirror, and the patients adjusted a set of knobs to improve image quality.  The Humphrey system, which is no longer in production, used a unique sliding lens system to evaluate smaller incremental changes than the phoropter could measure.  But while the device made more accurate measurements, the fabrication equipment needed to manufacture corrective lenses to match that accuracy has only become available within the last ten years, Thompson added.

With help from GTRI, DigitalVision is producing a new system that adds patented measurement technology and other improvements to the Humphrey concept.  Using computer algorithms not available in the 1970s, the GTRI researchers have redesigned the instrument’s optical system for higher performance.  The original assembly of pulleys and wires used to move the lenses will be replaced by microcontrollers and inexpensive actuators.

“We believe we have solved all of the fundamental issues that needed to be addressed,” said David Roberts, a GTRI senior research scientist who is leading the research and development project.  “The challenges are now down to engineering – controlling all the tolerances and keeping everything in alignment.”

The result, according to DigitalVision, will be a system in which a patient sits in an exam chair and looks at images in a two-foot diameter telescope-grade mirror while providing feedback through a hand controller.  The system will measure the amount of nearsightedness, farsightedness and astigmatism present and determine higher-order aberrations that the phoropter cannot detect.  The doctor will be able to show patients how much better they could see with the new prescription compared to their old one by using real images such as street signs and golf greens.  The VisionOptimizer’s specifications will be transmitted electronically to a fabrication laboratory that will custom manufacture spectacle and contact lenses.

“It’s more real-world than what eye doctors are using today, and has commonalities with video games for a population that is accustomed to interacting with computers,” said Leanne West, a GTRI senior research scientist who is also working on the project.  “For today’s population, the new vision test will be a fun and engaging experience.”

A patent-pending head and eye tracking system developed by GTRI is expected to improve the accuracy of the test by eliminating alignment errors.  GTRI’s tracking system will also eliminate the need for restraining the patient’s head, and should allow easier examinations of children, the elderly and people with disabilities.

“As you move your head around, the images will go with you,” explained Jose Garcia, the company’s chief technology officer.  “One of the issues with testing young patients, as well as older patients and people with disabilities, is that patient movement during the vision test leads to errors.  With GTRI’s eye and head tracking system, we expect that these groups can be tested with confidence that they are seeing the image properly and responding to the test.”

The Georgia Research Alliance, a public-private organization that supports the development of technology companies in Georgia, has provided the company with seed funding for commercialization.

“Anyone who has had an eye examination will appreciate the potential of DigitalVision’s technology,” said Lee Herron, vice president of commercialization for the GRA.  “While the product is still in the early stages, the company is making steady progress toward bringing its system to market.”

DigitalVision expects to have a prototype system ready for beta testing in as little as six months, and hopes to receive expedited approval from the U.S. Food and Drug Administration (FDA).  If all goes as planned, doctors may be able to purchase the new system in about a year.

“We feel that this market is ready for a disruptive technology,” Garcia added.  “Doctors in this space are hungry for technology to replace the phoropter.  This system will allow doctors to introduce a new category of corrective products to their patients.”