*In a career that spanned more than half a century, Gehrels fostered new research on asteroids and comets, including those that pose a threat to Earth.*

Tom Gehrels, an internationally noted planetary scientist and astronomer at the University of Arizona, as well as a hero of the Dutch Resistance during WWII, died Monday. He was 86.

Gehrels was among the first members of the fledgling Lunar and Planetary Laboratory when he joined the UA in 1961. During a long and distinguished career Gehrels pioneered new research on asteroids and comets, especially those that pose a collision threat to Earth. He also developed and taught introductory astronomy courses that were popular with non-science undergraduates.

Anton M.J. Gehrels was born Feb. 21, 1925, in Haarlemmermeer, the Netherlands. When Nazi Germany invaded the Netherlands in 1939, Gehrels joined the Dutch Resistance, fled to England and later was part of Britain’s Special Operations Executive, which sabotaged and spied on the Germans. 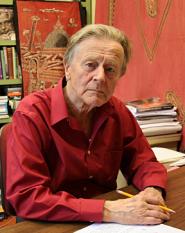 After graduating from Leiden University in the Netherlands in 1951 with a degree in physics and astronomy, Gehrels earned a doctorate in astronomy and astrophysics at the University of Chicago in 1956. During the 1950s, Gehrels pioneered the first photometric system of asteroids and discovered the opposition effect in the brightness of asteroids.

At Chicago, he also met and worked with Nobel astrophysicist Subrahmanyan Chandrasekhar and astronomer Gerard P. Kuiper. When Kuiper left Chicago in 1960 to start the UA Lunar and Planetary Laboratory, Gehrels followed in 1961 and continued a stellar career that would last another half a century.

During the 1960s, Gehrels pioneered the study of wavelength dependence of polarization of stars and planets. His research interests then migrated to imaging photopolarimetry of Jupiter and Saturn. He was the principal investigator for the Pioneer 10 and 11 Imaging Photopolarimeters, which sent back the first images of Saturn’s mysterious F-ring.

In 1980, Gehrels started the Spacewatch Project, which uses telescopes on Kitt Peak, near Tucson, to survey the sky for asteroids, including potentially dangerous ones. He also founded the highly respected Space Science Series, still published by the University of Arizona Press, and served as general editor for the first 30 volumes.

In April 2011, Gehrels was honored for his 50 years of service at the annual University of Arizona Service Awards luncheon.

Services for Gehrels have not yet been announced.