University of Delaware scientist Carl Schmidt is working to identify genes in crocodiles, alligators and gharials as he searches for links between the creatures that could give clues as to how they evolved over the years in relation to one another.

Schmidt’s effort is part of a National Science Foundation-funded project being conducted by a team of researchers assembled by David Ray, an evolutionary biologist at Mississippi State University.

Schmidt, a professor in the Department of Animal and Food Sciences in UD’s College of Agriculture and Natural Resources (CANR), explained that his role in the study is to receive DNA sequences from researchers who collect samples from the three species.

Instead of trekking through the wetlands tracking down alligators, crocodiles and gharials — a crocodilian native to the Indian subcontinent — Schmidt is conducting all of his research on dry land in the safe confines of CANR’s Charles C. Allen Laboratory, with much of the DNA sequencing being done at the Delaware Biotechnology Institute (DBI). “They don’t let me chase the crocodiles,” he joked.

Along with Colin Kern, a UD doctoral student in the College of Engineering, Schmidt receives the DNA sequences and then uses different informatics approaches to identify the genes. 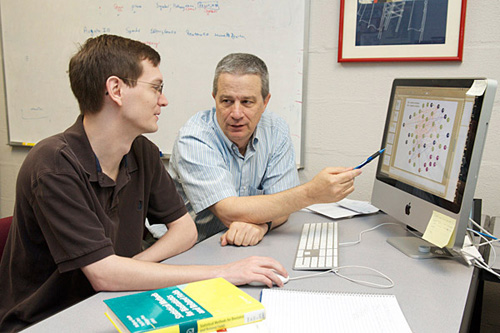 By identifying the genes that are commonly found in the DNA of the three creatures, Schmidt said that the researchers are able to predict where the genomic changes may have taken place.

This is particularly important when it comes to the gharial, which is an endangered species whose total world wide population numbers in the hundreds. “One of the things that I think is still a little unclear is the relationship of the gharials to the other crocodilians,” said Schmidt. “So one of the things we’re trying to tease out is the actual relationship between the gharials and the crocodiles.”

Because the gharial is so scarce, researchers have only been able to collect blood samples from the creature. In the case of the other two species, scientists have a variety of tissue samples, which allows for a broader array of DNA to be studied.

Despite the lack of tissue samples, the researchers are still confident that they will be able to discover the genomic changes, which in turn could lead to better conservation efforts to help the gharials avoid extinction.

Schmidt’s work will eventually dovetail with a study being headed by Erich Jarvis, associate professor of neurobiology at Duke University Medical Center, and Mississippi State’s Ray that focuses on the genetic evolution of the closest living relative of the crocodilian family — birds.

Of the relationship between birds and crocodiles, Schmidt said, “It goes back to evolution in terms of crocodiles appearing to be the closest existing relatives of the birds, and the birds being modern dinosaurs, basically.”

Schmidt said that he is interested to see what genes are shared between birds and crocodiles, and which ones are unique to each creature — such as feathers for the birds — and he is hoping that they will be able to tie the results from the two studies together.

“A lot of it relates to how evolution has affected these two different lines of animals that share a fairly recent common ancestor,” Schmidt said, adding, “One of the things that I’m curious to find out is what the genome of that common ancestor looked like.”