Turning fossil fuel into energy is easy: You just burn it. And live with the carbon dioxide byproduct. What if we could reverse the process and turn water and carbon dioxide back into fuel?

A dream solution, but it may seem like trying to put the genie back in the bottle.

Not for University of Minnesota researcher Jane Davidson. She and her colleagues are using concentrated light energy equal to 3,000 suns to find the most efficient way to convert carbon dioxide and water into synthetic gas, or “syngas,” with solar power.

Syngas is easy to transport via pipelines and is readily converted to high-energy-density liquid hydrocarbon fuels, or “synfuels,” with properties equivalent to what we derive from petroleum.

“We are aiming for unprecedented solar-to-fuel efficiencies that will enable the entire sunlight-to-synfuels process to be done with 10 percent efficiency and no input of fossil fuels,” says Davidson, a mechanical engineering professor.

“With 10 percent efficiency, we could hypothetically replace all the petroleum consumed today in the United States with solar collectors covering 15 million acres. That’s about half of what we use for highways. Solar fuels could play a key role in the energy mix of the next generation.” 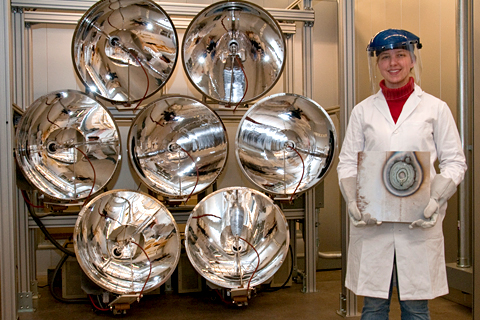 At the University’s Solar Energy Laboratory, the process begins with an indoor solar simulator in the form of seven mirrored, 6,500-watt lamps that concentrate the light on a 10-centimeter spot with an irradiance of 3,000 suns. (One “sun” equals 1,000 watts of solar energy falling per square meter of surface.) With this concentrated radiant energy, one can generate temperatures of more than 3,600 F in a chemical reactor. There, carbon dioxide and water are split to form carbon monoxide and hydrogen, the two components of syngas.

Davidson, along with mechanical engineering professor Tom Chase and their students, have developed two prototype reactors to split water and CO2. Deploying these technologies in the Earth’s sunbelt could yield enough renewable energy to significantly exceed the world’s current needs, the researchers say.

“More sun falls on Earth in one hour than is consumed globally in a year,” Davidson notes. “Harvesting the sun to meet our energy needs is a challenge with a huge payoff.”

Of course, it’s a little more complicated than focusing concentrated sunlight into a reactor filled with carbon dioxide and water. The key to the technology rests with using metal oxides in a reduction/oxidation cycle to reduce the temperature required to split water and carbon dioxide.

In the reactor, the metal oxides go through cycles in which they strip oxygen alternately from carbon dioxide or water—forming carbon monoxide or hydrogen, respectively—then release the oxygen as a byproduct. The syngas formed from the carbon monoxide and hydrogen can be converted into gasoline, diesel, jet fuel, methane (natural gas), or other products.

Davidson and her colleagues have produced syngas this way in their laboratory. They have moved from bench top experiments to demonstration in prototype reactors. While Davidson and Chase concentrate on designing reactors, University chemistry professor Andreas Stein and colleagues at Caltech and UCLA are researching new materials that could increase the efficiency and ease of operation.

If adopted, a “sunlight to synfuels” process would be an energy supply system in which the same amount of carbon dioxide that is removed from the atmosphere and locked into the fuels is released when the fuels are burned. Thus, it would be carbon neutral. And because synfuels can be the same as the conventional fuels, they won’t require a new infrastructure.