But as a recent North Carolina State University study shows, mating strategies aren’t the only things changing for G. hubbsi when predators abound. The shape and size of the male fish’s genitalia are also linked to the presence or absence of predators.

NC State Ph.D. student Justa Heinen-Kay and assistant professor of biological sciences R. Brian Langerhans show, in a paper published in the Journal of Evolutionary Biology, that fish coexisting with predators have longer, bonier and more elongated gonopodium tips than fish living without threat of predation. The gonopodium is the sperm-transferring organ in these livebearing fish.

Longer, bonier and more elongated gonopodium tips are, of course, relative; in small fish, these organ tips are generally only 1 millimeter long. Yet the findings suggest that male fish under constant threat of serving as a predator’s snack have evolved better ways to impregnate females under these conditions.

“When predators are around, G. hubbsi males spend a lot of time attempting to mate with females because of the high mortality rate,” Heinen-Kay said. “We hypothesize that G. hubbsi have evolved these bonier and more elongated gonopodium tips as a way to copulate even when females don’t cooperate.”

“Essentially, males need to transfer as much sperm as possible as quickly as possible, and this shape difference could help facilitate that,” Langerhans said. 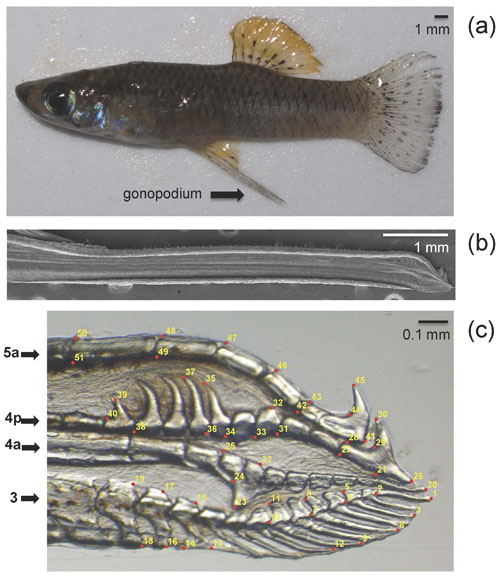 The male Gambusia hubbsi (a) and its sperm-transferring organ (b). The threat of predators is linked to differences in the organ tip’s shape (c). Image credit: North Carolina State University

The researchers conducted the study in so-called “blue holes” in the Bahamas. These “big test tubes” are caves that have filled with water in the past 17,000 years; Langerhans calls them aquatic islands in a sea of land. Some of these aquatic islands contain Gambusia predators, while others do not.