Even though Medicare spends over $1 billion per year on breast cancer screenings such as a mammography, there is no evidence that higher spending benefits older women, researchers at Yale School of Medicine found in a study published Online First by JAMA Internal Medicine, a JAMA Network publication.

Led by Dr. Cary Gross, associate professor of internal medicine at Yale School of Medicine and director of the Cancer Outcomes, Public Policy, and Effectiveness Research (COPPER) Center at Yale, the study sought to provide a comprehensive understanding of breast cancer expenditures that incorporate the cost of screening and associated work-up, as well as treatment. They assessed overall national costs, as well as variation in costs across geographic regions.

The Yale COPPER team calculated Medicare expenditures for breast cancer screening and treatment in 137,274 female Medicare beneficiaries who had not had breast cancer before 2006, and followed them for two years to observe screening, breast cancer incidence, and associated cost.

The team found substantial variation across geographic regions in Medicare spending for breast cancer screening – ranging from $40 to $110 per female Medicare beneficiary. The majority of the difference in costs was due to the use of newer, more expensive screening technologies in the higher-cost areas.

“Although screening costs varied more than two-fold across geographic regions, there was no evidence that higher expenditures were benefiting women living in the high-cost regions,” said Gross, who is a member of Yale Cancer Center. “Specifically, there was no relation between screening expenditures and the detection of advanced cancers.” 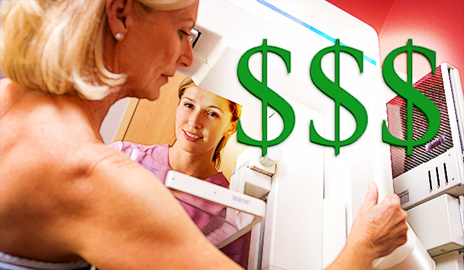 Recent guidelines from the United States Preventive Services Task Force have concluded that there is insufficient evidence regarding the effectiveness of breast cancer screening for women age 75 years and older. The COPPER team found that over $400 million is being spent annually on screening Medicare beneficiaries in this age group.

“We need further studies to identify which women will benefit from screening, and how to screen effectively and efficiently,” said Gross. “In some instances, breast cancer screening can save lives. But no woman wants to undergo testing if it is likely to cause more harm than good, and no health system — particularly ours — can afford to spend hundreds of millions of dollars on screening programs without evidence to support them.”

This study was supported by the National Cancer Institute (5R01CA149045) and the P30 Cancer Center Support Grant (CCSG) at the Yale Comprehensive Cancer Center.