A research team at the Georgia Tech Research Institute (GTRI) is developing an airborne testing capability for sensors, communications devices and other airborne payloads. This aerial test bed, called the GTRI Airborne Unmanned Sensor System (GAUSS), is based on an unmanned aerial vehicle (UAV) made by Griffon Aerospace and modified by GTRI.

“Developing new sensor technologies that can be effectively employed from the air is a priority today given the rapidly increasing use of unmanned aircraft,” said Michael Brinkmann, a GTRI principal research engineer who is leading the work. “Given suitable technology, small UAVs can perform complex, low-altitude missions effectively and at lower cost. The GAUSS system gives GTRI and its customers the ability to develop and test new airborne payloads in a rapid, cost effective way.”

The current project includes development, installation and testing of a sensor suite relevant to many of GTRI’s customers. This suite consists of a camera package, a signals intelligence package for detecting and locating ground-based emitters, and a multi-channel ground-mapping radar.

The radar is being designed using phased-array antenna technology that enables electronic scanning. This approach is more flexible and agile than traditional mechanically steered antennas.

The combined sensor package is lightweight enough to be carried by the GAUSS UAV, which is a variant of the Griffon Outlaw ER aircraft and has a 13.6-foot wingspan and a payload capacity of approximately 40 pounds. 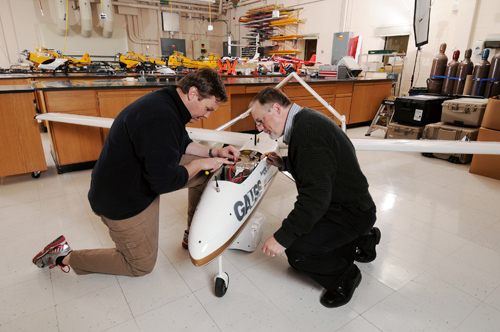 The aircraft navigates using a high precision global positioning system (GPS) combined with an inertial navigation system. These help guide the UAV, which can be programmed for autonomous flight or piloted manually from the ground. The airborne mission package also includes multi-terabyte onboard data recording and a stabilized gimbal that isolates the camera from aircraft movement.

Heavier sensor designs have several disadvantages, observed Mike Heiges, a principal research engineer who leads the GTRI team that is responsible for flying and maintaining the UAV platform. Larger sensors require larger unmanned aircraft to carry them, and those aircraft use bigger engines and must fly higher to avoid detection.

“Rather than have your design spiral upwards until you’re using very large and expensive aircraft, smaller sensors allow the use of smaller aircraft,” Heiges said. “A smaller UAV saves money and is logistically easier to support. But most important, it can gather information closer to the tactical level on the ground, where it’s arguably most valuable.” 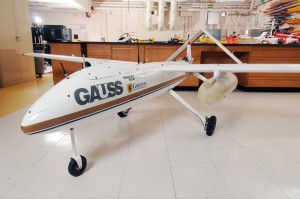 The GTRI team has developed a modular design that allows the GAUSS platform to be reconfigured for a number of sensor types. Among the possibilities for evaluation are devices that utilize light detection and ranging (LIDAR) technology and chemical-biological sensing technology.

“The overall concept for the GAUSS program is that the airplane itself will be simply a conveyance, and we can mount on it whatever sensor/communication package is required,” said Brinkmann.

The radar package that GTRI is currently installing and testing is complex, he explained. In addition to phased-array scanning capability, the radar operates in the X-band, is capable of five acquisition modes and can be programmed to transmit arbitrary waveforms.

“This radar is a very flexible system that will be able to do ground mapping, as well as detecting and tracking objects moving around on the ground,” Brinkmann said. “These multiple sensing capabilities offer many possibilities for defense operations, along with search-and-rescue and disaster-recovery operations.”

Possible applications include using the signals intelligence package to locate people buried in rubble by searching for cell phone signals, he said. In another scenario, a group of self-guided UAVs could be used to create an ad hoc cell phone network. That application could be potentially valuable in a post-disaster scenario where existing cell phone towers have been disabled, as happened after Hurricane Katrina, the Haiti earthquake and other events.

“The GAUSS platform is extremely helpful for proof-of-principle development and testing new concepts for airborne sensors,” Brinkmann said. “It gives GTRI a convenient and flexible base from which to pursue significant research in a variety of disciplines.”