Researchers have strengthened their understanding of how skin cells called melanocytes sense ultraviolet light and act to protect themselves with melanin. In a new study, they report experiments showing that an ion channel well-known elsewhere in the body for its chemical sensitivity, plays a central role in this process.

PROVIDENCE, R.I. [Brown University] — Last year, a team of researchers at Brown University discovered that certain skin cells use a light-sensitive receptor found outside of the eye to sense ultraviolet light and quickly begin pumping out melanin to protect against DNA damage. In a new study, lab members identify a key player in that biomolecular chain of events that could someday become a pharmacological target for improving this protective response.

The new discovery, published the week of Jan. 21 in the Proceedings of the National Academy of Sciences, is that human melaoncyte skin cells rely on an ion channel called TRPA1 to allow a flood of calcium ions into the cells when they are exposed to UVA light. The resulting abundance of calcium ions signals the cell to begin making melanin, the pigment responsible for the tanning response in people. 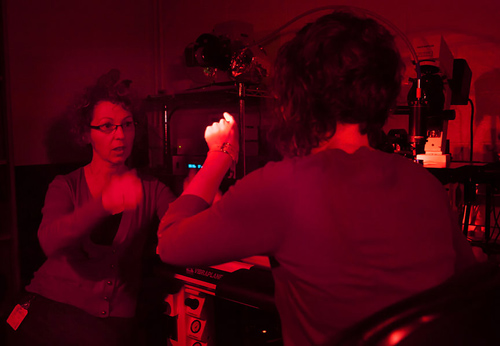 In search of a light-sensitive trigger Certain skin cells respond to ultraviolet light by pumping out melanin, the pigment responsible for the tanning response. The hunt for a light-receptor mechanism outside the eye led to an ion channel called TRPA1. Image credit: Mike Cohea/Brown University

Several experiments described in the paper show that TRPA1, which is known from a number of other appearances elsewhere in the body, is an essential step in the skin’s response to UVA light, said senior author Elena Oancea, assistant professor of medical science in the Department of Molecular Pharmacology, Physiology, and Biotechnology at Brown.

As a matter of basic science, the finding strengthens the evidence of a striking parallel between the skin’s response to UVA light and the way the eye detects light. 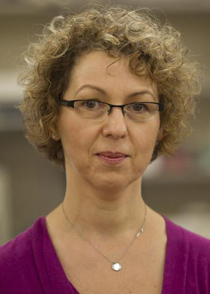 Elena Oancea. The discovery “is exciting because it confirms this phototransduction pathway is similar to those found in the eye.” Image credit: Mike Cohea/Brown University

In other parts of the body, TRPA1 has been shown to help detect pungent but benign chemicals, such as those in intensely flavorful foods. Oancea and lead author Nicholas Bellono said the chemical sensitivity of TRPA1 offers the intriguing possibility that it could become a target for experiments to boost melanin production.

“TRPA1 ion channels are involved in the detection of pungent chemicals such as cinnamaldehyde, wasabi, and mustard oil, and we’ve now found it’s important for this melanin response,” Bellono said. “There is a possibility that we can pharmacologically alter pigmentation through regulation of this ion channel.”

Oancea and Bellono emphasized, however, that people who go out in the sun should always take widely recommended precautions to protect their skin, such as using high-SPF commercial sunscreens or wearing protective hats and clothing.

From the prior research in Oancea’s lab, Bellono knew he was looking for some kind of molecular pathway that would start with a light sensitive receptor and trigger an elevated level of calcium ions in the melanocytes.

It seemed possible that a TRP ion channel would be involved because TRPs are involved in phototransduction elsewhere in the body that lead to an increase in intracellular calcium. There are, however, many types of TRP channels, and the molecular identity of the UVA-activated channel in melanocytes was not apparent. Oancea confessed that she even suspected another as the culprit. But many experiments later, the team hit on TRPA1 and amassed considerable evidence to confirm its vital role.

In one experiment, for example, they treated melanocytes with “antagonist” chemicals known to block TRPA1 activity. They then exposed the cells to UVA light and measured the resulting electrical response. The cells blocked with the antagonists had 80 to 90 percent reduction in current compared to the unhindered cells.

They used a similar technique of specifically blocking TRPA1 activity to show that the ion channel contributes greatly to the presence of calcium ions after UVA exposure compared to unhindered melanocyte cells. They also found melanocytes produce little or no melanin following exposure to UVA when TRPA1 is blocked.

They did not, however, do experiments to see whether adding TRPA1 stimulating substances could increase melanin production.

In addition to Bellono and Oancea, other authors on the paper are Laura Kammel and Anita Zimmerman.